Richard Johnson is set to return to the saddle on Thursday following his recovery from a broken arm.

Four-time champion jockey Johnson has been out of action since suffering the injury to his right arm in a fall at Exeter on January 21.

He trailed Brian Hughes by just three winners at the time, and is currently 19 adrift – with the score currently 111 for him and 130 for the northern challenger. 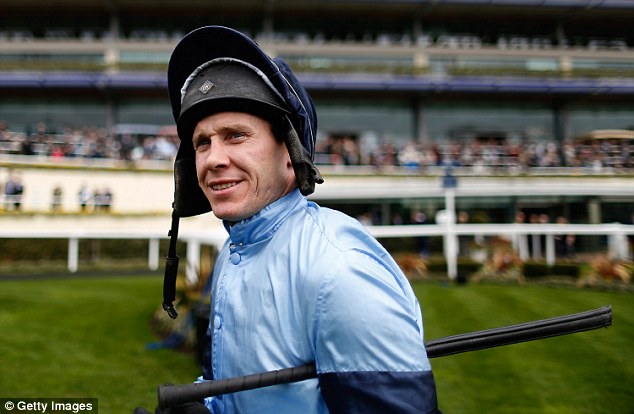 Johnson was always confident he would return in time for next month’s Cheltenham Festival, and has not ruled out being able to retain the championship.

It was only after a consultation with British Horseracing Authority doctor Jerry Hill on Monday afternoon, however, that he had confirmation he can return this week – and it will be at either Ludlow or Musselburgh.

‘I got the all-clear this afternoon, from the BHA doctor Jerry Hill,’ Johnson said.

‘Depending on what runs where, fingers crossed I’ll be back on Thursday.’

That will be either in Scotland for Olly Murphy, or closer to home for Johnson at Ludlow – where he is currently booked to ride Philip Hobbs’ Truckin Away in the Join RacingTV Now Chase.

He added: ‘The first couple of days will be relatively quiet, to get back into it, and I’m looking forward to being back in the old routine.

‘It is nice to have actually got the green light off the people you know you have to – and to hear they are happy I’m ready to get back to it, to resume normal service.

‘Ten days or so before Cheltenham is a good time – if I’d only been able to come back the Friday before, it wouldn’t have been long to get into the routine again.’

As for the possibility of catching Hughes in the title race, Johnson is not about to give up by any means.

‘I’ll just be looking for that first winner back, to start with,’ he said.

‘Realistically, I know I’m still going to be up against it.

‘But there is that chance. So whether you are riding a 50-1 shot or going for the championship, as long you have that chance, I like to feel I have an opportunity.’

Tags: Jockey, Johnson, Richard, set, to
You may also like
Latest Posts

USWNT, U.S. Soccer settle part of equality suit
Recent Posts
This website uses cookies to improve your user experience and to provide you with advertisements that are relevant to your interests. By continuing to browse the site you are agreeing to our use of cookies.Ok