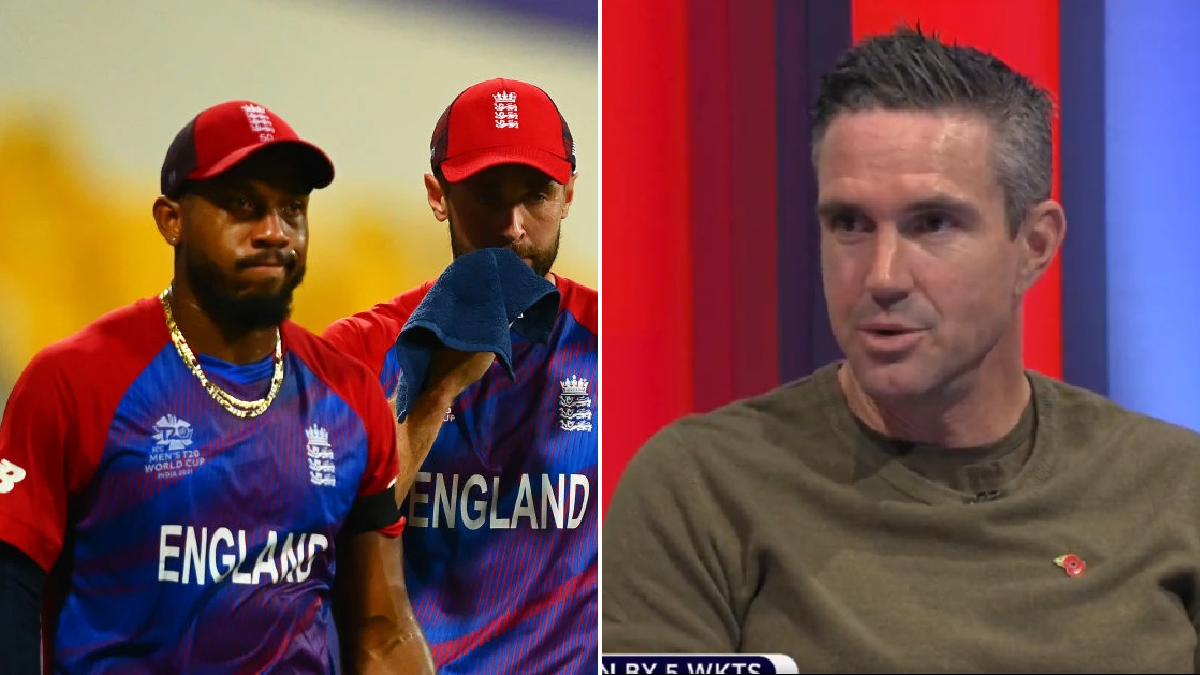 Kevin Pietersen defended Chris Jordan after he was hit for 23 in one over during England’s disappointing T20 World Cup semi-final defeat to New Zealand.

Chasing 167 for a place in Sunday’s final in Dubai, New Zealand slipped to 107-4 in the 16th over, with Chris Woakes taking two early wickets and part-time spinner Liam Livingstone impressing with 2-22.

But the 17th over bowled by Jordan went for 23 as the Black Caps began a brilliant fightback with Jimmy Neesham hitting two sixes and a four and Jordan delivering two wides.

Neesham fell for 27 from 11 balls in the 18th over but Daryl Mitchell (72 not out from 47) took over the assault, twice smashing Woakes into the stands as New Zealand clinched a five-wicket win with six balls to spare.

‘These things happen in T20 cricket. These things can happen,’ Pietersen, who helped England win the T20 World Cup in 2010, told Sky Sports.

‘It was almost done for England and then Neesham does what he does. What can you do?

‘Chris Jordan is a fabulous cricketer and a great guy. We know how well he trains, we know how much he’s liked. He’s a brilliant professional who you know was doing his best.

‘But tonight, Neesham got him. It is what it is. What can you do? He may not have bowled well but the pressure exerted on him by Neesham got the job done for New Zealand.’

Referencing the decisive 17th over, Pietersen added: ‘[Jordan] was slightly off there. A number off the balls were in the slot.

‘Was it good batting? It’s absolutely fantastic batting because Neesham has come out and smashed it from ball one. You have to give him credit for that. Sometimes it’s just not your night and it wasn’t Jordan’s night tonight.’

England, bidding to become the first team in history to hold both the T20 and 50-over World Cup trophies, posted 166-4 in the semi-final clash thanks to 51 not out from Moeen Ali and 41 from Dawid Malan.

Two early wickets from Woakes saw New Zealand’s chase start poorly, but Mitchell and Devon Conway (46 from 38) gradually got the Kiwis back into contention before Neesham’s hitting sparked the chase to life.

New Zealand have never won a World Cup – losing the 50-over final to England in dramatic fashion in 2019 – and will face either Pakistan or Australia in Sunday’s final in Dubai.

Captain Kane Williamson said: ‘We knew it was going to be a great game of cricket and it certainly proved to be the case.

‘It ebbed and flowed as they seem to often do against each other but really chuffed at the heart that was shown throughout the whole performance.

‘They had a pretty competitive total on the board at the halfway stage but just by staying in there – and obviously an outstanding from Daryl Mitchell at the top – and building those little partnerships and just trying to cash in on some small moments and some match-ups was really the difference. But a great game of cricket.’

‘Unfortunately, in a tight game we have come out of the wrong end of the stick. I can’t fault anything we’ve done tonight.

‘We have fought unbelievably hard throughout this tournament. We’ve represented ourselves unbelievably well but tonight we have come up short. I am extremely proud of the guys.’