Riding on the crest of a wave! Life is a beach for Grand National hopeful Potters Corner

On a bracing, breezy morning as the waves crash on to Traeth yr Afon beach, the clutch of hardy dog walkers and the lone adrenalineseeking kitesurfer are probably unaware they are sharing their playground with a National hero.

At Aintree on April 4, Christian Williams-trained Potters Corner, who was the first home-trained horse to win the Welsh National in 54 years when successful at Chepstow in December, could become a Grand National hero and one with a link to one of the race and sport’s biggest names.

Back in the 1970s, the iconic Red Rum won three Grand Nationals and finished second in two more while trained on the sands at Southport by colourful Ginger McCain. 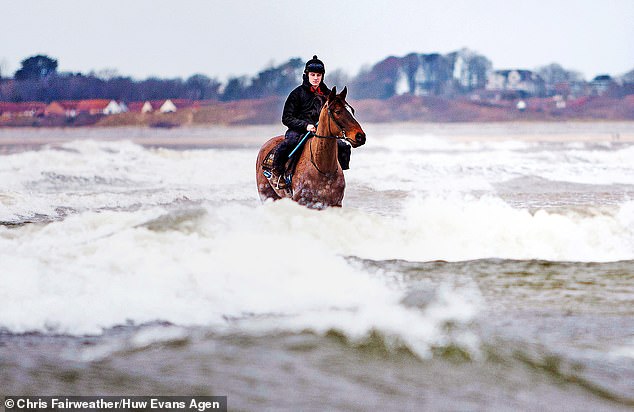 The salt water Red Rum waded through during McCain’s training regime was credited with curing a crippling bone disease that may have claimed his life, let alone his racing career.

Southport and South Glamorgan have little in common, apart from taking racehorses back to nature. Williams is making the most of the natural resources.

His horses start each day walking past the ruins of Ogmore Castle before circling in the cooling waters of the Ewenny and Ogmore rivers that spill into the ocean at Ogmore-by-Sea.

They canter through myriad paths that wind through the largest (840 acres) and highest sand dunes in Western Europe and do long conditioning work on the edge of the surf with a mile of pristine sand stretching round the bay to Porthcawl. 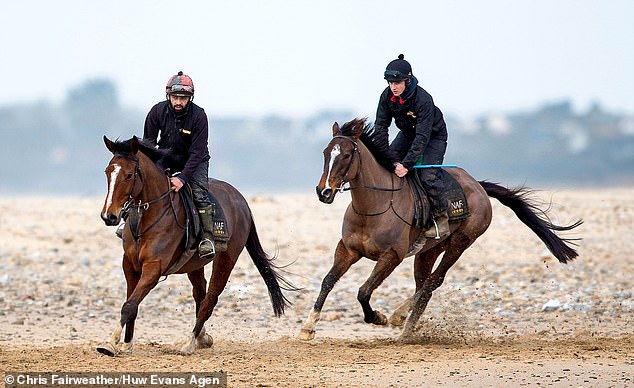 Former jockey Williams, 37, said: ‘It’s a massive asset. I have 35 horses and I have only had one injured all season. I don’t know if that is a coincidence.

‘The cold water helps with inflammation and, if a horse gets a little cut, he can stand in the river each day for three or four days and soon be back in his normal routine.

‘Some horses just stand in the water for 20 minutes and then go back out to the field while the sea water acts like a poultice on open wounds, drawing out infection.

‘Training on deep sand is completely different. I train slow and steady. It is going back to the old days and it seems to be working.’

It definitely has with Potters Corner. After a promising start to his career, he was sidelined for almost two years with a tendon injury after breaking down at Newbury in January 2017.

Williams bought the now 10-year-old horse when he was working for leading owner Dai Walters. Williams decided to take the gamble 18 months ago and returned home to set up training alongside the family pony trekking business with only three horses. Helping Williams to do that was Welsh and Lions rugby centre Jonathan Davies, who owns a third of Potters Corner. 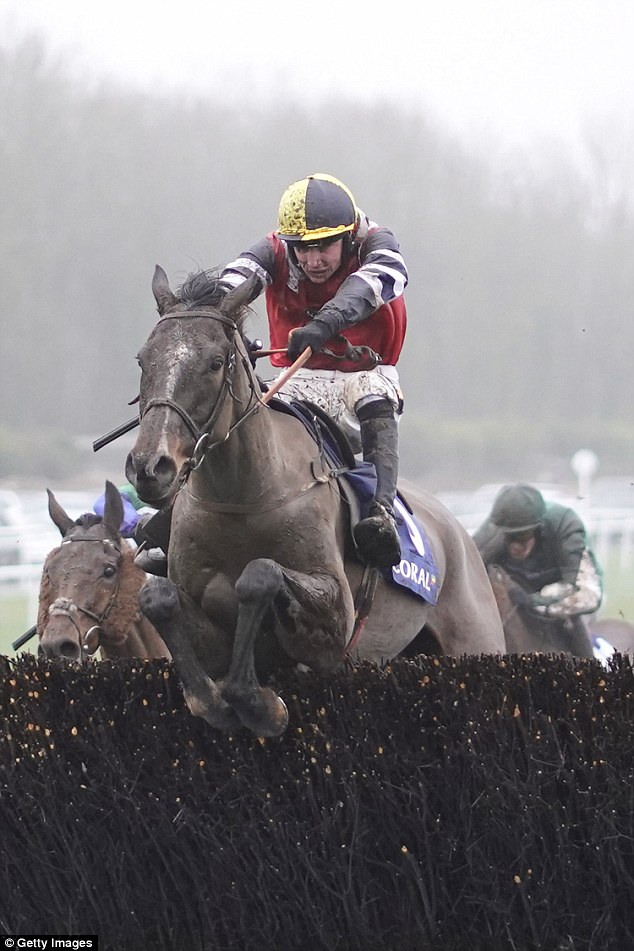 A knee injury has kept Davies out of the Six Nations but it did mean he was at Chepstow for the home win. He will also be at Aintree where his horse is 20-1 in the ante-post betting, having been allotted a handy 10st 6lb for the £1million marathon chase that grips the nation.

The rugby connection is apt. Williams’ uncle, Gareth, was No8 for Bridgend and Wales and toured South Africa with Bill Beaumont’s Lions in 1980. Gareth’s brother, Owain, played for Bridgend and Cardiff and earned a cap for Wales.

Young Christian was in the same school class as Nicole Cooke, gold medal-winning cyclist at the 2008 Beijing Olympics. He had dreamed of wearing the Wales No10 jersey while at Brynteg Comprehensive School, the rugby player factory that has produced Gavin Henson, Rob Howley and the legendary JPR Williams.

When Potters Corner won last season’s Midlands National at Uttoxeter, Davies and his team-mates were beating Ireland in the Six Nations decider at the Principality Stadium.

Williams said: ‘The camera went on to Jonathan and the boys were jumping up and down and screaming after the match. They said on the TV they were celebrating their win but it was nothing to do with the rugby. One of the subs had told him that Potters Corner had won! He is racing mad.’

As a jockey, Williams won on the great Denman in his first three races while working for champion trainer Paul Nicholls. He was second in the 2005 Grand National on Royal Auclair.

He also suffered horrendous injuries — breaking both arms in a fall at Cheltenham that needed 15cm of nerve transferred from his leg to his arm after snapping his axillary nerve to leave his deltoid muscles paralysed.

One day at Warwick, he returned to the weighing room because of the pain when trying to get into the saddle. A fall in the previous race had left him with a broken leg. But, Williams insists, it was frustration he was not doing better rather than injury that prompted him to quit riding and ultimately ‘fall into training’.

The win of Potters Corner in the Welsh National has fired his hopes that he can really make a go of it at the top level.

Williams said: ‘I did not think it would come true, it was too much of a fairy tale. I was overwhelmed, although I tried not to show it. We needed so much to go right. It has raised the profile of the yard.’ It is a year since Potters Corner fell at the second last when in contention to win the Eider Chase at Newcastle. Williams has never watched a replay.

‘It was a risk coming home. We had no choice but to make it work. My parents are not millionaires. I thought it was my one big chance and it was gone,’ he said.

He need not have worried. He had a big hurdle win with Limited Reserve at Sandown this month. Now his training career is on the crest of a wave that could carry Williams and Potters Corner to Aintree glory.

Tags: a, beach, for, Grand, is, Life, Nati
You may also like
Latest Posts