Test star Nathan Lyon and Ashes aspirant Sean Abbott have gone the extra mile for the sake of Australian cricket.

In a sign of how firm a hold COVID-19 still has on the game, the NSW pair made the 878-kilometre drive from Melbourne to Sydney on Tuesday after being told they could not take a commercial flight home due to Cricket Australia’s biosecurity protocols. 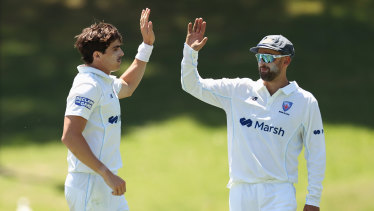 Cricket officials are not taking any risks in ensuring the country’s Test stars can get from so-called “dirty states” Victoria and NSW into Queensland to prepare for the start of Australia’s Ashes defence.

The decision to make two members of Australia’s potential Ashes attack drive home the day after a Sheffield Shield game was made to minimise the chance of them being exposed to the virus.

A chartered flight for Lyon and Abbott was considered too expensive by CA, which last season footed a $30 million bill for its biosecurity measures so that its $300 million season could be saved.

It is unusual in elite sport for players to travel interstate by road, unless injured.

In the AFL, Sydney defender Colin O’Riordan, accompanied by a paramedic and the club’s welfare manager, made the 4000 km trek from Darwin to Sydney by car in 2016 as he was unable to fly due to a punctured lung he suffered playing for the reserves against Northern Territory Thunder.

The day-long drive would test the nerve of any player, particularly after a heavy defeat, but Abbott could at least see the funny side, posting a lighthearted entry on his Instagram account of a picture of Lyon, nicknamed the GOAT, alongside the Big Merino, a 15.2-metre concrete ram in Goulburn. 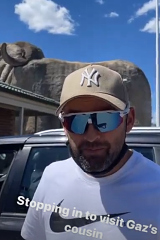 Nathan Lyon, nicknamed the GOAT, with The Big Merino.Credit:Instagram

Lyon and Abbott could not play in NSW’s one-day game against Victoria on Friday after the Blues called up players from outside their Shield squad who had been living under different COVID conditions in Sydney.

The players, some of whom played in Sydney Premier cricket on the weekend, travelled to Melbourne on a commercial flight on Tuesday, potentially exposing themselves to the virus.

It has, however, created a peculiar scenario where Victoria pair Marcus Harris and Nic Maddinson, both expected to be named in Australia’s extended Ashes squad, can be on the field with the players.

Victoria and NSW players are living under tight restrictions during the games in Melbourne. The measures allow for training, playing cricket, purchasing essential items and ordering takeaway. Victoria and NSW announced 1003 and 216 new cases of COVID respectively on Wednesday.

A chartered flight will take the Victoria-based members of the extended squad, yet to be announced by CA, from Melbourne to Brisbane, stopping in Sydney to pick up Lyon, Abbott and support staff.

That contingent will time their arrival in Queensland with the return of the T20 World Cup squad currently on duty in the United Arab Emirates. CA has exemptions for players to train while completing their 14 days of quarantine in Queensland.

Tags: Abbott, and, I, Lyon, made, take, to
You may also like
Latest Posts