Savatiano could have a group 1 date in the Canterbury Stakes after proving too strong for her fellow mares in the Millie Fox Stakes at Rosehill on Saturday.

The Street Cry five-year-old won The Hunter before going for a spell and, as the winner of more than $1.5 million in stakes, she got into the race  best under the set weights. 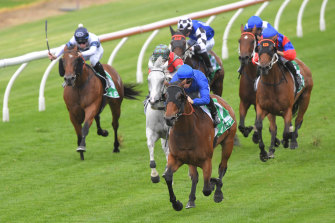 James McDonald gave her the perfect ride following the main danger, White Moss, to the turn before pulling of her back and race away to score by 2¾ lengths.

“She’s come back in tremendous order,” McDonald said. "I gave her a click at about the 500 and it was the wrong thing to do because she just towed me up behind them.

Darren Beadman suggested Savatiano has made a habit of winning second-up and the next step could be a group 1.

“I think she could possibly find herself in a Canterbury Stakes versus Alizee,” Beadman said.

“She is showing that turn of foot on that find of ground and normally she is better second-up.

“First-up run she always takes a run to come to hand. She is a mare with a lot of promise.”

'Sky's the limit' for Master Of Wine

Michael Hawkes is not one to get carried away with his horse, but Master Of Wine has him excited not only for the autumn but beyond towards the Cups later in the year.

The stayer returned a more mature version of the horse that landed in Australia and demolished a benchmark field over 1400m. Tommy Berry simply cruised to the turn then pull out to the centre and kept increasing the margin, which stood at 3½ lengths to group 3 winner Aliferous at the post.

"This horse's best attribute is he's got the biggest turn of foot, and you just saw that. As the races get longer, it's going to be pretty exciting," Hawkes said.

"Last time we thought he was a Cups horse and he just fell short because of immaturity.

"He will definitely head towards that in the spring. We wanted to give him a light autumn but who knows where he might take us. The sky is the limit for this horse."

Master Of Wine was the second of a winning double for the Hawkes yard after Greyworm also returned a winner earlier in the afternoon.

He holds entries for the Queen Elizabeth Stakes and Sydney Cup.

“We will let takes us where he wants to go, but he is a nice horse that has above average ability,” Hawkes said.

Mustajeer showed his class in sustaining a long run to win the Parramatta Cup first-up and   trainer Kris Lees has set his sights on the Tancred Stakes.

The imported galloper, which was brought to Australia for the Caulfield and Melbourne Cups last year, took off  600m from home and opened a big margin but had to  fend  off Eastender late to win.

"It was really pleasing to see him track into a race over this distance like that. He's had no trials, a few nice gallops at home, so it's very pleasing," Lees said.

"He had nothing to take him into the race, so he had to do it all himself from the 600. He was probably entitled to get a little tired late.

“I don’t think he got the two miles in the spring, so the Tancred is race we are going to target.”

Mustajeer gave Hugh Bowman a winning double after his success on Farnan in the Silver Slipper, and he thinks the stayer will be up to weight-for-age grade.

“We probably didn’t expect him to do that today but it’s no great surprise,” Bowman said. “He was purchased for weight-for-age racing and he raced well in the spring in the Caulfield Cup.

“He’s certainly a more furnished horse mentally to the horse we saw in Melbourne last year. It’s exciting for them.”

Splintex could be lightweight Galaxy chance

Mark Newnham had winners in Sydney and Melbourne on Saturday after Spintex and Greysful Glamour both led all the way.

Splintex never looked in danger in the Spark Of Life Stakes and could return to the Rosehill 1100m for group 1 Galaxy next month.

“He is a really talented sprinter and likes Rosehill,” Newnham said. “He would only get 50kg in a Galaxy and would put himself in the race.”