Just occasionally, Sophie Molineux will bring a spin bowler’s sleight-of-hand to the composition of the Australian team playlist.

“Every now and then when I get the opportunity to play music, I’ll play the music that is quite common, and trick the girls into a bit of comfort,” Molineux tells The Age and The Sydney Morning Herald from Brisbane, ahead of Australia’s series with India. “Then I’ll pop a country song in there and that always gets a bit of carry-on. A very interesting social experiment!” 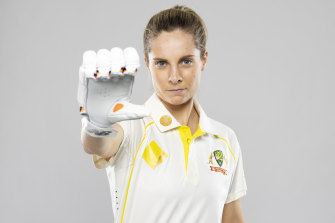 Country music is a big part of Molineux’s life, more so from the time she left her home town of Bairnsdale in regional Victoria as a teenager for a life in professional cricket. At 23, she has already lifted a couple of Twenty20 World Cups and, this year, was bestowed the captaincy of the Melbourne Renegades.

“Mum and Dad are more ’80s rock ‘n’ roll, which I do enjoy listening to now as a little bit of a guilty pleasure,” Molineux says. “But when I moved to Melbourne I gravitated towards country just to bring a little bit of country to the city, and that probably made me a feel a little bit more at home, especially in those early stages.”

The strains of Luke Combs, Luke Bryan or the Florida Georgia Line may not get the rest of the dressing room dancing. But they’ve been a companion for Molineux over an 18-month period where, through COVID-19, even the three-and-a-half-hour drive from Melbourne to Bairnsdale was often blocked by lockdowns.

“When there’s been gaps in between lockdowns I’ve literally jumped in the car and spent as much time at home as I could, just to make the most of it, because I know this time last year we weren’t able to get home at all,” she says. “Whenever there was an opportunity these last few months, I’ve been very quick to head down the highway. 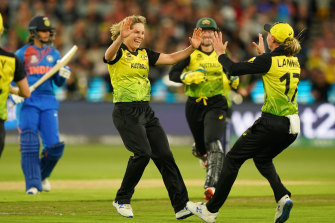 Sophie Molineux celebrates the wicket of Smriti Mandhana during the 2020 World Cup final.Credit:AAP

“You just want to cram those opportunities in. Take cricket out of it, that feeling of freedom and being able to make decisions and do things when you feel like them. Any chance you get to be able to do that, we all value a little bit more now.”

Whether fixing the team playlist or swiftly getting home to see family amid a global pandemic, Molineux has shown the sort of adaptability and speed of thought that will be critical to her role as Australia’s senior spin bowler against India. The forced absence of Jess Jonassen, a giant of the Meg Lanning era with her crafty left-arm spin, leaves Molineux as the most likely candidate for the captain to call upon.

Jonassen and Australia’s assistant coach and fellow left-arm spinner Shelley Nitschke have both imparted plenty of advice. Molineux is also hopeful that her recent work with the noted slow-bowling coach Craig Howard, an avowed believer in hard-spun, attacking lines and seam positions, will help her stay a step ahead of India’s batters across the three-format series.

“It’s been great to spend the past three or four years learning off Jess and seeing how she goes about it,” Molineux says. “Her ability to read a game and to read batters is incredible and I think it’s one of her greatest traits.

“There’s heaps of pieces to that puzzle. Experience comes with the ability to be able to pick up little things like back lifts and situations in the game and potentially what they’re wanting to do versus what we want to do. Now throwing in a different format in Test cricket, that makes the challenge even more exciting.”

Few will be greater than that of Shafali Verma at the top of the order. Australia have enjoyed some success in defeating Shafali’s heavy hitting with pace, but Molineux admits to plenty of planning for the moment when she is pitted against the 17-year-old wunderkind.

“Shafali is going to be a really big challenge, bowling to her,” she says. “We’re all putting time and effort into our plans against her and everyone else in that top order because they’re definitely full of personnel who can take a game down in the space of five overs.”

Leadership, too, will be an emerging theme for Molineux this year. She has worked closely with the former captain Belinda Clark. “There’s probably things I’m going to be a little bit blindsided by and naive to, purely because I haven’t captained a team at senior level,” Molineux says.

“Most cricketers now are well and truly across their own plans, and the next step for me is being able to put myself in everyone else’s shoes and be able to come up with plans with each bowler.”

Whether pitted against India, leading the Renegades or facing up to England in the Ashes later in the season, Molineux will hope not to lose sight of something that COVID-19’s lockdowns and quarantines have provided a timely reminder about – her chosen career also happens to be a game, and an extremely fun one at that.

“Cricket is just as important in my life as it was before COVID, but it feels a bit more like it felt as it was as a kid playing it,” she says. “There’s a lot of hard work behind the scenes to be able to get a game of cricket up now. I just want to make sure I do it with a smile on my face because you never know when your next game could be.”

Cricket and fun should go together pretty smoothly. As Combs once sang: “What’s the point of this ol’ guitar if it ain’t got no strings? Or pourin’ your heart into a song that you ain’t gonna sing?”

Tags: country, is, Molineux, spinning, T
You may also like
Latest Posts