The trainer of Alabama Express, the victor in the group 1 CF Orr Stakes at Caulfield earlier this month, is confident his three-year-old can be the party pooper in next Saturday's Australian Guineas.

The Kiwi raider Catalyst and the Queensland high-roller Alligator Blood dominate the betting for the $1 million classic. 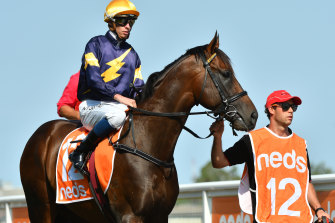 But neither has yet achieved what Alabama Express has already: beaten older horses at group 1 level.

Trainer Mike Moroney has confirmed that the son of Redoute's Choice, who sidestepped the group 1 Futurity Stakes at Caulfield on Saturday, will definitely be in the field for the Guineas.

And he had a warning for all comers that the lightly raced colt will be right in the mix when the whips are cracking.

"He will run in the Guineas. He's come up really good. We have always set a program for him and we couldn't see any reason to change," Moroney said.

"It was a hard decision [not to run at Caulfield] once we saw the nominations, because he loves the track.

"But we felt for the longevity in this campaign we would not do that because we still had other races in store for them."

Pundits already regard this season's crop of three-year-olds as an outstanding generation and while Catalyst, Super Seth and Alligator Blood (the latter the pair who quinellaed the Caulfield Guineas) are rated on top at the moment there are plenty willing to bet that other, more late-maturing types, could take higher ranking by the end of the season.

Alabama Express certainly has the credentials to make that sort of improvement having run only six times to date.

Asked where his colt fitted in the pecking order, Moroney said it was impossible to judge at this point.

"I think like everyone, they don't really know. He's improved a lot from the spring to now and that's the question. On what we saw in the spring he had to improve, but he has, it's just how much compared to them.

"We are pretty confident on what we have seen we are up to them. I think the improvement has been quite big."

The problems Alabama Express suffered in the spring might stand him in good stead in the second half of the season. Moroney did not rush him and he did not have a series of hard races while he was still developing.

"He was always behind the eight ball, now he's caught up to them. Things just went wrong with him, he just didn't have match practice.

"He won his only start at 2, we were going to have an attack at group ones, things went wrong, we had to stop and have a little operation. He got a bit of a cold and things went wrong so we didn't rush him.

"It could be a blessing, he's a lightly raced colt and always had a great nature."

Moroney also has high hopes for his Caulfield winner from Saturday, imported galloper Aktau, who he is going to try to qualify for the Caulfield Cup next October.

Aktau scored over 2000 metres on Saturday under Jye McNeil and Moroney will aim him next at the Mornington Cup. The winner of that race gets a guaranteed start in the next Caulfield Cup.

Moroney, a noted trainer of stayers – he won the Melbourne Cup with Brew in 2000 – is optimistic that he will be much better beyond 2000 metres.

Tags: Alabama, confirms, for, G, Moroney
You may also like
Latest Posts