Noel “King” Callow has his first Saturday metropolitan ride back in Queensland but don’t expect to see him rushing back to town with the popular jockey revealing he is happy on the Gold Coast circuit for the time being.

Having made the trip north from Victoria two months ago due to a lack of opportunity, Callow is happy at his Gold Coast base and says he could be there for the foreseeable future if it continues to work out.

Teaming up with trainer Chris Munce, Callow will ride Boomsara in the Listed Eye Liner Stakes (1350m) where the five-year-old will look to go one better than his second placing in last year’s race.

“He ran second in the race last year, he’s drawn an OK barrier this time around and I thought he run the other day was good,” Callow said.

Boomsara comes out of the $200,000 QTIS Gold Jewel earlier in the month where he ran second behind Tumbler Ridge.

Currently rated a $9 chance by TAB, Boomsara will jump alongside favourite Amish Boy. 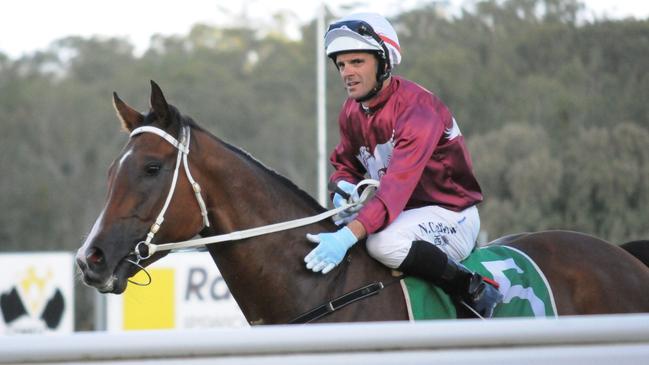 With Hugh Bowman returning to Sydney to ride, Callow has the chance on the son of Spirit Of Boom along with three other rides on the day.

“It was just a ride that was available. There’s a couple of others on the day too,” he said.

“I would be on the Gold Coast riding if I could but there is no Gold Coast meeting this Saturday.”

Riding plenty of winners on the provincial circuit since arriving in Queensland, Callow said he was enjoying life in the Sunshine State and was in no rush to return to Victoria.

“It has been good. It’s great on the Gold Coast, I am going to keep turning up each Saturday, I don’t really have any plans to go back to Melbourne,” he said.

“We’ll take it day by day but at this stage.

“We will go back to the Gold Coast next week, not far to go, only eight minutes (from my accommodation).”

Callow will ride the Les Kelly-trained Minto’s Paradise in the two-year-old Bundamba Plate along with Fuji Flyer and Notingforthepress.