Damien Oliver has been at the top of the jockey ranks for more than 30 years, and he showed exactly why he stands among the all-time greats when he displayed plenty of patience and plotted the perfect course for the favourite Anamoe to come through in the closing stages to land the $2 million Caulfield Guineas, sending punters who had backed him into short priced favouritism into raptures.

The Godolphin owned Anamoe, who had won at group 1 level as a two-year-old, showed he had matured as a three-year-old with excellent lead up form in Sydney culminating in a close second in the Golden Rose. 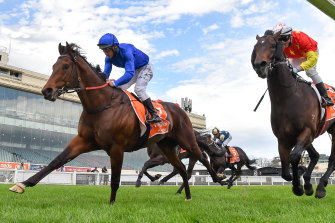 And he continued that progression in scintillating style in a fast run Guineas, defying his wide draw to round up Captivant to win going away, with the slow starting Artorius, his market rival, running on late to grab third place ahead of the always prominent Light Saber.

The question on everyone’s lips post race was what lies in the immediate future for the son of Street Boss, given that he could back up in a fortnight’s time in the Cox Plate, where, as a three-year-old, he would carry a feather weight.

Godolphin’s Melbourne stable representative Sean Keogh was not prepared to commit to any future endeavour, deferring to head trainer James Cummings in Sydney.

But Oliver, who has forged a successful relationship with the Melbourne arm of the Godolphin operation in the past year or so, is confident that should connections decide to head to the Valley the classy colt would prove up to the task.

“I wouldn’t put it beyond him. He’s a big strong colt. He relaxes well. I’m sure the team will have a discussion about that. He’s certainly got the right temperament for it and he’s a lovely horse. We’ll see what happens.“

This was Oliver’s second win in the Guineas, 31 years after his first – aboard Centro for the Freedman brothers – one of whom, Anthony, saddled up Artorius in this year’s Guineas.

Much has changed in racing since then, but Oliver’s position at the top of the tree has remained, a constant in world of continual flux.

It is remarkable to think that he has now ridden group 1 winners not just for James Cummings, but also James’ father Anthony and the greatest of them all, James’ grandfather Bart, who supplied Oliver with his first group 1 winner Submariner, also in 1990.

He said the race had developed exactly how he had wished.

“It probably panned out the way I hoped. I was hoping to find the back of Captivant. He’s a good horse and he could take me into the race three-wide with cover.

“It doesn’t always work out the way you want it but it did today. He’s a nice momentum building horse and he was able to unleash a good finish down the outside.“

Sean Keogh was exultant at the outcome.

“He’s just such a wonderful animal. Such a rare animal and the expectations on the horse from ‘day dot’ have been there and that adds to the pressure. He’s delivered,” he said.

“In his two-year-old year he was a Group 1 winner and to turn that to the highest level as a three-year-old is just unbelievable.

“This was a grand final target, you might say. He always seemed in the mould of a horse that would relish the mile, a classic type.”

Tags: aboard, an, lands, Oliver, Victory
You may also like
Latest Posts