Allan Border described it as the “greatest heist since the Great Train Robbery”.

Shane Warne claimed in his first autobiography that if the Test had been on television in Australia, “it would be remembered as one of the great matches of all time.”

As Australia prepare for the first Test against Sri Lanka in Galle, 30 years on from an incredible 16-run victory in the opening Test of the 1992 series in Colombo, the match retains a special place in the dusty annals of history.

It has been recalled a lot recently, mentioned in sad dispatches eulogising the late Shane Warne as the moment the unknown leg-spinner showed the world he was a worthy Test cricketer.

In the steamy heat of the Tropical Teardrop, as Sri Lanka appears on a map hugging southern India, Australia had stirred, refusing to accept seemingly inevitable defeat.

Craig McDermott had bowled himself to a standstill and captain Allan Border rolled the dice. 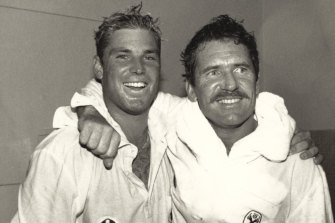 “With them needing 30-odd to win, still four wickets in hand, I threw the ball to Warnie,” Border recalled in Shane Warne: My Own Story . “It was a huge gamble. He looked a little shocked to get the ball but said he was ready for the job. We won a Test we shouldn’t have and the Warne legend was born.”

Veteran spinner Greg Matthews, chosen after a year out of the team and bowling gallantly from the other end, offered a simple piece of advice.

“Spin the top off it,” Matthews urged Warne. “It doesn’t matter if it bounces twice.”

So Warne stood at the top of his mark with career figures of 1-335 approaching the end of his third Test.

And then the Test was over. Warne had finished it by taking three wickets in 13 balls without conceding a run.

“Those three wickets changed things for me,” Warne said in a moment of rare understatement.

History tells us how big that moment was. But at the time, Warne had been the last piece of the puzzle put in place to claim a most unlikely victory.

Despite Warne’s late heroics, the pivotal player was Matthews, who must feel a bit like Arthur Morris.

Often asked where he was when Don Bradman made a duck in his final Test innings at The Oval in 1948, Morris would reply: “Down the other end. I made 196.” 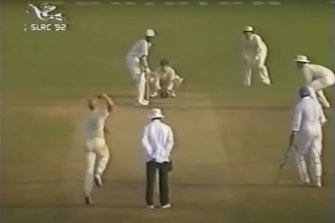 Matthews was player of the match with seven wickets for the Test and a vital 64. It was also one of Australia’s greatest fightbacks. Only once before had they won a Test after trailing by more than 200 on the first innings. That was against South Africa in Durban during 1949-50.

For Warne, the overwhelming feeling was relief that he had finally made a contribution at Test level. That he really did belong.

For the senior players such as Border, Ian Healy and David Boon, they celebrated with unrestrained joy after some long and difficult tours of the subcontinent. Australia went on to win their first Test series in Asia for 23 years when the next two weather-marred Tests were drawn.

Just as significantly, Australia were carrying a poor away record from the previous 15 years, with just ten wins and 27 losses in 65 Test. The Ashes in 1989 was their only series victory overseas during that time.

Like any tour of Sri Lanka, the preparation was all about spin. Yet when local skipper Arjuna Ranatunga won the toss on that first morning, he sent Australia in on a moist pitch which offered his modest seam attack surprising assistance.

“He should never have declared,” Border muttered later, reflecting the scars of so many difficult and fruitless campaigns from the early part of his reign.

During an unusual second innings Boon was top score with 68 yet Australia managed 471 thanks to a number of solid contributions and a furiously wagging tail.

Having hit seven fours in his 37, de Silva charged McDermott again, trying to lift him over mid-on for another boundary.

Border threw off his cap, sunglasses, and 37 years, charging 20 metres to take a specular diving catch which changed the course of the game, and allowed Warne to begin creating history.

*Malcolm Conn covered the 1992 tour of Sri Lanka as a chief cricket writer.