Mitchell Starc and the country’s top male stars are poised for a massive payday in the Indian Premier League, as Cricket Australia braces for another off-season country versus cash debate.

Ideally, CA would prefer its best players rest during their leave period to freshen up after seven months on the road instead of playing in India but given the eye-boggling sums on offer in the world’s most lucrative T20 league it is a battle they will not win. 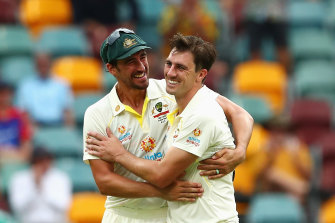 The combination of a mega player auction next month, two new franchises and an increased purse of $940,000 per team, means there are even more riches on offer.

With Glenn Maxwell the only Australian player retained by his IPL franchise, the first-choice Test attack of Pat Cummins, Starc and Josh Hazlewood, and superstar batters Steve Smith and David Warner, all stand to benefit from the favourable market forces. World No.1 Test batter Marnus Labuschagne has indicated he too wants to play.

But with limited-overs series against New Zealand and Sri Lanka at home to come after the Ashes, followed by Test tours of Pakistan in March, and Sri Lanka in June and July, there is hardly any time to have off.

The idea of players missing games for their country while freelancing in T20 leagues is a sore point for many national boards but a fact of life in the modern game. It will be even more jarring if players make themselves unavailable for the Pakistan tour yet accept the cash on offer a month later in neighbouring India.

Players this week received a briefing from CA and the Australian Cricketers Association after their recent reconnaissance visit. The ACA is not expecting every player to travel to Pakistan, even if security approvals are ticked off.

Starc was non-committal when asked if he would make himself available for Australia’s first tour of Pakistan since 1998 if it were to go ahead.

“We had a bit of a briefing the other day about the upcoming tour,” Starc said. “I think it gives time for all players to process that information. Obviously we’ve got a Test match this week to play in and perform in, and then we’ll move onto what happens next.”

Starc, though, is set play in his first IPL since 2015, having missed previous editions to rest body and mind after a long home summer and spend time with his family. He was one of few Australian players to put country over club last year.

The left-armer will be keenly sought by franchises with track records of splurging millions for lightning-fast quicks, as seen by the prices fetched for rising star Jhye Richardson ($2.5 million) and the then uncapped Riley Meredith ($1.4 million) last year.

Cummins, too, can expect another multimillion-dollar return, while Hazlewood’s stocks will be high after starring roles in the Chennai Super Kings’ 2021 title and Australia’s T20 World Cup success.

Warner’s player-of-the-tournament performances in the T20 World Cup will not have gone unnoticed by franchises, despite an eventful finish to his seven years with Sunrisers Hyderabad.

Despite the national men’s team’s busy schedule, it would be in CA’s interests for players to take part in the IPL leading into Australia’s defence of the T20 World Cup on home soil later this year.

“I’ve got two days to get my paperwork in, that might be something I do today before training,” Starc said.

“I haven’t put my name down just yet, but I’ve got a couple more days to decide on that. That’s certainly on the table regardless of what the schedule has coming up.

“I haven’t been for six years or so, obviously a heavy weighting towards T20s over the last period of time and World Cup coming up later this year that’s one to take into consideration as well.”