Ole Kirk has stamped himself as the most valuable colt in the land and jockey Willie Pike also laid claims to being one of Australia’s best jockeys after riding his second group 1 win of the day in Saturday’s Caulfield Guineas. 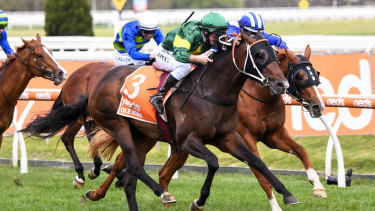 Co-trainer Wayne Hawkes said Ole Kirk, a close relation to Black Caviar, was a $20 million colt after his second straight group 1 win – and if connections made the decision to retire him tomorrow he wouldn’t try to dissuade them.

Pike has never had a better day in Melbourne. The Guineas was his fourth win for the afternoon, his second at the elite level after Arcadia Queen’s Caulfield Stakes upset.

Pike tried to follow Blue Diamond winner Tagaloa in the run, but was forced to duck in and then out to get clear air as the well-backed Tagaloa retreated.

But the rider kept his cool, switched positions and got out in time to chase down Aysar before the winning post.

The West Australian wizard said it would take time to sink in how good a day he has had.

“As much as I’m loving it and I’m having a great day, some of my early wins … the Railway Stakes on Elite Belle and the Kingston Town on Perfect Reflection, days I really set myself for, they definitely come to my memory first and foremost, but I’m sure I’ll go home and definitely watch these replays once or twice,” he said.

Hawkes said there was no doubt of Ole Kirk’s standing among this season’s crop of three-year-olds.

“What it means is he’s the best three-year-old in the country now, it’s as simple as that,” he said.

“If they want to retire him, I’m happy with that. He can go to the paddock now and have a well-earned break.”

Michael Walker sprang one of the biggest shocks in recent racing history three years ago when he won the Caulfield Guineas on the 100-1 shot Mighty Boss for trainer Mick Price.

He made it a Guineas double on Saturday when he teamed up with Price once again to land the Thousand Guineas on Odeum, although this time the filly saluted at the more punter friendly odds of $9.

The daughter of Written Tycoon was one of the least experienced in the race in only her fourth career start.

But she showed no signs of greenness either in the run or at the finish when she won smoothly from Personal from the Tom Dabernig and Ben Hayes stable, with the South Australian filly Instant Celebrity nearest at the finish in third place.

This was also a first group one winner for young horseman Michael Kent junior, who now trains in partnership with Price.

Walker said he had "never been this confident going into a Group 1".

"I really thought she could win today and she did. I’m struggling to get rides at the moment. For what reason, I don’t know. I’m riding good. I had a good ride at Flemington the other day, and a Group 1 today. I’m just going to keep working hard."

Price will now give his classic winning filly a spell, reasoning that she has done enough to earn a good break and come again in the autumn.

“She’s a filly that has bloomed this whole preparation…. I haven’t overworked her and she looked fantastic in the mounting yard. I’m just pleased for Michael Walker.

“I have a soft spot for that bloke. I know it is very competitive for those jocks, but every Tuesday he is there, every Saturday he is there (to ride work at Caulfield).

"He’s got a little baby, he’s got a good partner, so he’s got a good family background at the moment. He’s in that nice settled zone and he can do what he does best and that’s ride.”

Tags: and, Kirk, Ole, Pike, stamp, their
You may also like
Latest Posts