Glenn Maxwell insists the stardust from his rampant Indian Premier League campaign remains as the Australian team backs their top order muscle to floor Pakistan and give themselves a shot at Twenty20 World Cup glory.

Australia’s women adopted the mantra of playing fearless cricket in its fairytale success last year, and their male colleagues are aiming to do something similar in their semi-final in the Middle East.

What had been shaping as a weakness leading into the tournament now was a strength for Justin Langer’s men as they recovered from a bruising loss to England to move within two wins from claiming Australia’s first men’s T20 world title.

There has been a strong correlation between the fortunes of the team and its opening pair David Warner and Aaron Finch, who, after a scratchy start, have delivered performances which have left teammates and coaches confident they are peaking when it matters most.

Though teams can live and die by the blades of their openers, Australia has bolstered its batting depth with wicketkeeper/batter Matthew Wade at seven to give their top order a licence to thrill.

It is likely to be a formula the side will stick with for the semi on Friday morning (1am AEDT) having deviated from it against England. 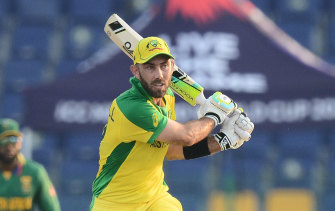 Glenn Maxwell says Australia’s extra batting depth is allowing the side to bat with more freedom.Credit:Getty

“For us, it’s to play with freedom, to back the fact we’ve got a really strong top order, we’re playing the extra batter, we’ve got a fair bit of batting there,” Maxwell said.

“To know we’ve barely used our five, six and seven through the tournament probably shows how good our top few have been.

“I’ve also seen teams hold wickets back to make sure they can go at the back end and give themselves the opportunity to play with freedom. For us, it’s playing with freedom at the start and really trying to make the most of the power play and putting the opposition on the back foot.”

The dominance up top means Maxwell has been confined to the back seat for much of Australia’s World Cup ride. After a red-hot run in the IPL, Maxwell has made scores of 18, six and five and was at the non-striker’s without having faced a ball in the comprehensive wins over Bangladesh and the West Indies.

It has been a few weeks since he made a big score, but Maxwell says he could not be more confident he can fire if required.

“I feel like I’ve done so much work at training, and I’ve been here for two and a bit months, I know the conditions really well,” Maxwell said.

“It doesn’t matter if I haven’t batted for a few days or what not, I feel like I’m still in that headspace of where I was in the IPL when I was hitting the ball really cleanly and feel ready to play whatever role I need to when I get out there.

“I’m certainly not fazed by a lack of time in the middle because it’s been a really nice change. It means the top order is going really well if I’m not spending much time out there, it’s been good.

“Hopefully [I’m] not required, or required for another zero not out and just stay at the other end.”

Tags: Australia, freedom’:, play, with
You may also like
Latest Posts