South Africa's T20 squad has limped into Port Elizabeth after a record battering from Australia that reinforced the deep issues facing the proud cricketing nation.

A summer of discontent continued for the Proteas in Johannesburg, where the hosts were skittled for just 89 in a 107-run drubbing at the Wanderers. 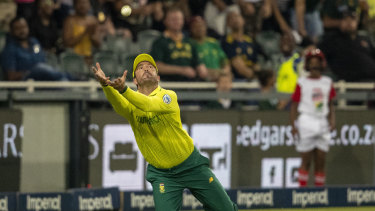 South Africa’s Pite van Biljon attempts a catch on a night where the hosts’ fielding was very poor.Credit:AP

It is both South Africa's heaviest T20 defeat and lowest total in the format, with a hat-trick to Ashton Agar (5-24) adding insult to injury.

The rot started with a sloppy bowling and fielding display which was torn to shreds by local media.

"It took about 90 minutes for a rampant Australia to dump South African cricket back into a dark hole," The Citizen wrote, describing the performance as "pitiful".

Sport24 likened the Proteas to "boys against men", while the Saturday Star lamented the hosts conceding 70 runs in the powerplay.

"It was ill-disciplined and unbecoming of a professional unit who seem better at making excuses … that actually getting out on the field and doing their jobs properly," columnist Stuart Hess wrote.

The series-opening drubbing is another setback for South Africa, which over the past two years has lost to varying degrees the services of modern greats AB de Villiers, Hashim Amla, Dale Steyn, Morne Morkel and Vernon Philander. 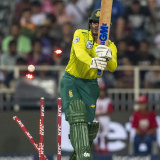 The Proteas will head into game two of the three-match series at St George's Park on Sunday night hoping for an improved performance from pace spearhead Kagiso Rabada, who was uncharacteristically poor on return from a rest.

"We've got to get back on the horse," coach Mark Boucher said.

"If we rock up and play 40 per cent cricket we are going to get beaten and beaten badly, like we were today."

Tags: by, loca, Proteas, shreds, to, torn
You may also like
Latest Posts