Champion sprinter Nature Strip is set to take the familiar role as the favourite for The Everest at Randwick on Saturday but remarkably, it will be the first time he starts as the punters’ elect in his three appearances in the world’s richest race on turf.

As the prospect of a soft track increased with more rain on Thursday, Nature Strip shortened from $4.60 to $4 after a faultless preparation, even though he was beaten by Eduardo in The Shorts. 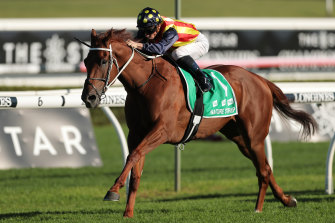 Nature Strip is set to finally start favourite in The Everest on Saturday.Credit:Getty

It isn’t something he has experienced in the past two years when he finished fourth and seventh, and has Chris Waller’s confidence growing.

“I feel he is in the best condition of his career,” Waller said. “His coat is looking the best it has been in a couple of years.”

Nature Strip replaced defending champion Classique Legend at the top of betting on Thursday as punters rallied to seven-year-old.

“He has got the Hollywood combination of Chris Waller and James McDonald, they just love them in big races,” Bluebet boss Michael Sullivan said. “Nature Strip is always a horse that punters like because they know what they will get from him. He is going to out in the front and the one to run down.

“I think they are starting to worried about Classique Legend being first-up, and they want to be on the horses that have been running well in the lead-ups.

“Surprisingly to me, there is plenty of money for Gytrash. He was pretty unlucky in The Shorts and if we turn him out to $8, there is immediately money for him, so he has found his mark around the $7 mark.”

Nature Strip has started favourite at 26 in his 32 starts and TAB punters were keen to lock in a price about the $4.20 mark.

“He is always popular but in the last 24 hours, he is most popular horse with us this week,” TAB’s Glenn Munsie said. “The money is really following market order, but we have taken 50 per cent more on Nature Strip than Classique Legend, and he looks like starting a clear favourite come Saturday.

“There remains a watch on the weather, and if the track gets really wet, I think Nature Strip will start even shorter.”

Randwick remained rated a soft 7 and missed most of the later afternoon storm on Thursday but ATC tracks manager Nevesh Ramdhani expects the track to stay in the soft range.

“Most of the rain is predicted overnight and that will decide if the track stays in the soft range,” he said.

Meanwhile, Front Page was scratched from the Kosciuszko due to a ligament injury to the near-hind leg. The slot-holder will pick a runner from the emergencies on Friday.

Tags: make, Nature, Punters, rally, S, to
You may also like
Latest Posts