Selections based on a heavy track.

4. Ain’t He Grand was a little disappointing on face value on debut having his chance at Kembla,
sitting on speed and battling on for fourth. Blinkers go on and had a 1200m trial leading in with the
shades on. Well worth another chance.

Dangers: 2. Emancipist ran up to good support with a close second at Kembla at his second starts,
the same race as Ain’t He Grands’s debut, then fair effort on pace to run fourth over the same
course. Gate one again here a plus and is the logical danger. 5. Ignacio started favourite at his debut
at Kembla in a 1200m maiden and may have found it a bit sharp as he made some ground into
fourth. Extra trip likely a plus for him and is open to improvement. 1. Nyika was close up when
resuming at Kembla in a 1400m maiden and will relish some more ground. On debut ran second over
this course on a heavy track so worth keeping in mind.

1. Silvanito arguably should have won first-up at Kensington two weeks ago in a race with a few hard
luck stories. Heavy track shouldn’t be an issue and given the finish he showed fresh he’ll be hard to
hold out with a clear shot. 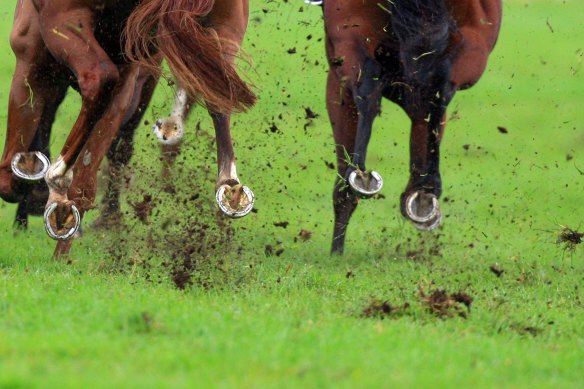 The action fierce at Canterbury on Wednesday.Credit:Jenny Evans

Dangers: 8. Orzala is a very well-bred filly on debut for the O’Shea-McDonald combination and is a
big threat on what she’s shown in her two trials leading in. Half-sister to Carif and dam was a G1
winner at 1600m and 2000m. 2. Kote comes through the same race as Silvanito and he didn’t have
the best of luck in running eighth. Was a late scratching from Kembla last Saturday. Adds some
interest. 7. Lamorlaye has been solid in two runs for a third and a fourth after getting well back in
both. Imagine she drifts back again but if she can hold a closer spot from an inside gate she could
figure prominently.

Things look to have fallen into place for 5. Twilight Affair to repeat her all the way win from this
course back on August 17. Run down by the smart Roots last week at Warwick Farm and will be the
one they have to catch.

Dangers: 3. Ruby Kisses has been in the finish at her last three starts at Canterbury and has a handy
weight turnaround on Twilight Affair for their clash last month. Just under two lengths between
them so she’ll have her chance to turn the tables. 1. Impulse Control will be fitter for the one run
back here over 1100m though she was a bit weak in the last 200m. Loves the wet and races on the
pace so capable of improvement. 7. Rocklily had some specking in the market first-up at Kensington
but was always well back and didn’t come into the race at all. Fitter and if the pattern allows she can
be running on.

1. Brown Thomas has found form of late and while he’s giving away weight to his rivals he has a
decent set up to run well again. Competent in heavy ground and has a win over 2200m last start
against his name. Drawn to have every chance.

Dangers: 8. Sanstoc is an up and comer who improved quickly second-up to score narrowly at Wyong
over a mile. Bred to appreciate the extra ground and is worth plenty of respect. 5. Strelitzia brings a
consistent country record to town and beat a subsequent Midway winner when scoring first-up at
Tamworth a month ago. Finds James McDonald and wouldn’t surprise if she measures up. 6. Bastida
has proven to be a good wet-tracker and fitter for one run back at Scone over 1600m where he held
his ground OK. Distance and heavy track bring him right into the mix.

How to play it: Brown Thomas E/W;
Odds & Evens: SPLIT.

2. Kelvedon Road is a promising type who overcame a slow start and outside bias to win first-up at
Canberra a few weeks ago on a heavy track. Blinkers on and finds a winnable race in town and if he’s
in touch on the turn should take holding out.

Dangers: 5. Turning likely lands in front from the inside alley and should be close to a peak now after
two runs back for two thirds. Led last time at Kensington held on OK. 9. Zoffany’s Gaze has yet to
finish worse than second in five starts and arrived in time to win first-up on his home track a month
ago. Interesting booking of James McDonald to ride and he’s worth considering. 1. Savoury was
always well back in the same race as Turning and picked up a couple late when resuming. Fitter for it
and any improvement in the track would help his cause. Has won four from seven at this track so
stays under notice.

1. Quality Time was unplaced on a heavy track first-up but that was at 1300m and he improved
nicely up to this trip last time out. Drawn to enjoy a similar run not prepared to say a wet track is
against him yet. If he backs up that last effort he’s hard to beat.

Dangers: 3. Owen County was never a factor first-up but it might be significant getting back onto a
heavy track given both his wins to date have come on that surface. Extra trip suits and while drawn
out if they are running on he should be competitive.

10. Bob’s Your Uncle has been freshened since
lumping 64kg to win at Goulburn on a heavy track in mid-July. Could potentially find the lead here
and take running down. 5. Whangaehu was expected to perform here first-up, starting favourite, but
was only fair then similar showing at Kensington two weeks ago. Prepared to give him one more
chance.

How to play it: Quality Time WIN;
Odds & Evens: ODDS.

4. Fox Fighter will need his share of luck in running but if he gets it, this is a very nice race for him.
Bumped into Mazu and Zapateo first-up last prep and had a heavy track placing first-up. Always runs
well fresh and expecting him to be hard to beat.

Dangers: 7. Girl Mania was unlucky first-up then another good effort at Kensington last time though
she did have her chance running on down the outside. Logical danger and should be thereabouts. 2.
Depth That Varies overcame a wide gate to win that race first-up at Kensington and will need to do so again to repeat it. Heavy track might be something of a negative but can’t dismiss after such a
nice return. 5. Delacour would be the likely leader and while she was reeled in by Depth That Varies
last time she handles all ground and could give a sight if she does lead them.