Gosford meeting. Selections based on a soft to good track. Monitor for bias/pattern.

Lightly raced improver 1. Nickelback had too much to do first-up after being retrained early from a wide draw and got too far back. The three-year-old gelding hit the line hard, and Punter’s Intelligence recorded he ran the fastest final 400m/200m splits of the entire meeting in 22.90/11.67. 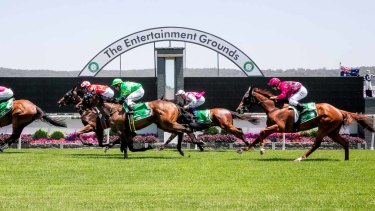 Racing returns to Gosford on Thursday for an eight-race card.

He improved approximately three lengths second-up last preparation when going onto a drier surface and brings a dominant ratings profile relative to his rivals here.

The Team Hawkes trained galloper receives a significant barrier change and can settle closer, with the step up in distance being ideal. In addition, he brings a strong starting price profile and looks hard to beat with even luck.

Dangers: 2. Laos Fortune led at an even tempo at Newcastle 19 days ago and tried hard to the line in a high-rating race. The three-year-old gelding is on an upwards ratings spiral and is coming out of time/sectional races.

Further, he looks like the main danger to Nickelback. 5. Al Ash Lad comes out of the same race and will appreciate the drier track. Add 4. Valoria and 6. Mr Showman to trifectas and first fours.

How to play it: Nickelback WIN. Odds & Evens: SPLIT.

Forgive 1. Aramis last start at Hawkesbury 11 days ago, where he was severely checked after the start and then was never happy throughout transit. Further, he was rock solid in the market $4.80-$4.50 and proceeded to race keenly after the interference.

Before that start, he ran on well at Canterbury over an unsuitable distance. The three-year-old gelding is fitter and produced his career peak figure third-up last preparation. Expect him to be hitting the line hard and have the last shot.

Dangers: 2. Dirty Merchant broke through for his maiden win at Newcastle 12 days ago and ran fast time relative to the day. He maps to lead or box seat and brings a competitive last start figure.

Market watch 7. Ponte Pietra who resumes without an official trial and can sprint fresh. 6. Mirror Queen has had excuses for this preparation and will appreciate a drier surface. 5. Capital Elle is racing consistently.

How to play it: Aramis WIN. Odds & Evens: SPLIT.

Debutante 12. Our Lady Stardust looks a nice type and won a recent trial in fast time/sectionals. Further, a placegetter has come out of that heat and confirmed the form. The two-year-old filly is well-educated and has the natural gate speed to take a forward position.

Additionally, the Gerald Ryan & Sterling Alexiou training partnership is renowned for having their runners wound up and ready to run well first-up.

Dangers: 1. Change Is Coming is another first-starter who has been solid at the trials. He will need some luck from the draw but expect him to be fighting out the finish.

Market watch 15. Choose Your Words who returns after a long break and has trialled well enough. 17. Secret Revolution has had no luck all preparation and receives blinkers for the first time. Add 2. Coolex to all exotics.

How to play it: Our Lady Stardust WIN. Odds & Evens: SPLIT.

4. Smashing Eagle has trialled well in preparation for his first-up assignment for new trainers M W & J Hawkes. The three-year-old colt hit the line under light riding and gives every indication he is wound up and ready to run well here. Expect an aggressive ride early to take a forward position and be given every chance.

Dangers: D-Day 6. Lady Fraulein who has shown ability at the trials but has had genuine excuses on race day. Further, the filly was lame on debut and then failed on a heavy track last start at Warwick Farm.

She is a key market watch, and the drier surface is ideal. Debutant 1. Cosmic Minerva won a recent heat at Rosehill and will roll forward. 10. Smart Thinker brings a fitness edge and 5. Costa De Oro can improve entering her second preparation.

6. Superargo sat outside the leader in a strong tempo last start at this track/distance, and to his credit, he stuck on well into third placing.

The three-year-old gelding has had factors against all preparation and is ready to win fourth-up. He maps to have complete control of the pace, and the in-form Sam Clipperton takes over the riding duties.

Dangers: 3. Kenzan resumes and hasn’t raced for 600 days but contested the Group 1 Victoria Derby (2500m) last preparation, albeit starting at $91. However, he has trialled ok and is a key late market watch.

4. Party Shop comes out of the same race as Superargo, and although he was run to suit, he had to race in the inferior ground. 9. Elegant Poetess is rock-hard fit and add 10. Little Bit Yours to trifectas and first fours.

How to play it: Superargo WIN. Odds & Evens: SPLIT.

5. Walkintalkin sat outside the leader in a strong tempo and battled on OK last start at Newcastle 12 days ago. The three-year-old gelding has been a victim of wet tracks and can improve significantly going back onto a drier surface where he produces all his peak figures.

Further, he maps to lead and control the pace, has strong form lines surrounding gallopers such as Rule Of Law/Kir Royale and will give a sight.

Dangers: 3. Hadouken resumes and has trialled well enough. He hit the line hard first-up last preparation in a high rating race and will look to replicate that performance.

Forgive 2. Sealion who raced wide at a fast pace and can bounce back. He receives blinkers for the first time and will roll forward. 8. Fairey Barracuda won dominantly at this track/distance 14 days ago and ran one of the fastest final 200m sectionals of the day in 11.71. 1. Famous Pedrille will be fitter and add him to all exotics.

The Chris Waller-trained gelding 5. Sulmaher has had no luck in his past two starts after being checked at critical stages and losing momentum. He ran the race’s second-fastest final 600m-200m split last start at Wyong seven days ago in 23.60 but was blocked for most of the final furlong.

He is suited over further distance, and his sectional profile suggests he is set to peak fourth-up. Each-way.

Dangers: 9. Sneaky Island has a strong starting price profile and has raced this preparation consistently. Moreover, she can settle closer with a significant barrier change. 1. Zedly was bravely defeated at this track 14 days ago and never shirked the task to the line. 3. Portnoy will roll forward, and Hugh Bowman rides for the first time. 7. Piccinni is a knockout chance.

Lightly raced improver 14. Humble Star resumes and has trialled well without winkers on. The three-year-old raced well first-up last preparation and got too far back in the run but recorded one of the fastest final 400m-200m splits of the entire meeting in 11.36.

New trainer David Pfieffer looks to have the gelding wound up, and he gets key factors in his favour with a positive map, and jockey Hugh Bowman rides for the first time. In addition, he has always promised ability and brings a strong ratings profile relative to his rivals.

Dangers: 5. Lady Brook has trialled well in a fast time heat and brings solid form lines to this event. The five-year-old mare maps to have all favours, brings multiple competitive figures, and jockey Sam Clipperton jumps aboard.

1. Prince Invincible sat outside the leader in a strong pace last start and can bounce back into form onto a drier track. Market watch 2. Resilient Star who can sprint fresh. Add 7. Riva De Sol and 8. Illustrating Law to trifectas and first fours.

How to play it: Humble Star WIN. Odds & Evens: SPLIT.