Love the placement of talented provincial four-year-old 3. Miss Konjiki second-up with a crucial claim to offset the big weight. Hit the line hard resuming in a similar country race, and even better suited getting on to a bigger track, and drawn to get plenty of cover. Only missed a place five times from 19 starts, and at her best on a firmer surface. 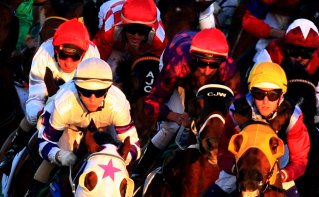 Dangers: Improving three-year-old 4. Asherla is a threat third-up also back on a bigger track from a handy trailing draw; while 5. In Spades who is hard fit and 7. Redeeming Spirit third-up; head the rest.

How to play it: Miss Konjiki to win. Odds and Evens: Split

Provincial filly 11. Piccadilly Lass has been disappointing in her first prep when well in the market, but can hit back hard here fifth-up with blinkers coming off. Has found the line okay in two runs at this track against deeper opposition, and a change of jockey carrying 1kg less is a further plus.

Dangers: Improving three-year-old 4. Party Stop can improve sharply on the six-day back-up; while 8. All Stretched finished well at big odds behind a smart winner here at just her second start. Include 12. Twisted Nikkas fifth-up in all exotic bets.

How to play it: Piccadilly Lass to win. Odds and Evens: Split

Even sprint battle for the boys. Although from a soft draw and coming off a barrier-to-box maiden win, improving three-year-old 3. The Big Seal is the one to beat staying at the distance. Has only finished further back than second in seven starts, and has tactical speed to utilise the low draw.

Dangers: Home tracker 4. Scarzel is consistent over this trip and draws to get a soft run on speed. Also from a handy gate, keep safe Rosehill-based 2. Stariks who was a dominant country winner in this grade two starts ago before feeling the pinch in tougher provincial grade. Both 1. Luff who drew well and swept home to win a weaker race second-up; and 5. Trumpster resuming; can run into the minor end of the money.

Local four-year-old 6. Polylithic resumes off a 10-month break from a wide gate, but comes to hand quickly. Only missed a place once in five starts, and this is weak.

Dangers: Watch the betting on home tracker 1. Drawn To Win progressing off a solid debut; while at bigger odds 9. Denarvi improves sharply second-up on firmer ground.

How to play it: Polylithic to win. Odds and Evens: Split

Capable provincial filly 9. Cristalino was given no hope last start on a much smaller course settling in an awful spot a mile back behind traffic. Still found the line well enough, and the extra trip and bigger track are right up her alley. Is by a Victoria Derby winner, and hasn’t missed a place in four runs this prep.

Dangers: Improving local filly 7. Piccinni charged home for a dominant heavy track win last start, and while less advantaged on firmer ground, is hard fit for the distance and well capable of going back-to-back. Gap to the rest headed by 2. Dancin’ Dude who finished well in deeper grade only seven days ago; while 5. Dunlee likes to settle well back, but has a sound record here, and winkers go back on.

How to play it: Cristalino to win. Odds and Evens: Odds

Like progressive three-year-old 1. Annulus second-up with a claim 10 days between runs. Hit the line hard when resuming here, and can settle midfield with cover and finish over the top.

Dangers: Big watch on local three-year-old 3. Out In Force at his second start, with senior jockey sticking; while two-year-old metro filly 11. The Seven Seas resumes off a sound trial; and two-year-old hometracker 10. Snizzi debuts behind two improving trials, with an important gear addition.

How to play it: Annulus to win. Odds and Evens: Odds

Got plenty of time for progressive local three-year-old 3. Russley Crown who charged home to miss narrowly second up here in a CL1, and will go on to win better races than this. His only win from three starts came on debut here last December on a firm surface.

Dangers: Provincial four-year-old 2. Prince Akeem has more than enough ability to offset the tricky barrier in this grade. Finished too well to claim a similar race two starts back before again hitting the line late behind a smarter one 24 days ago. Keep safe resuming 8. Sea Legend behind a quiet trial; while 9. Bay Of Kotor improves sharply back in distance fourth-up; and 11. Keynote is over the odds freshened up after a smart first-up win at Tamworth.

How to play it: Russley Crown to win. Odds and Evens: Split