Track likely soft 7 and rail true so fairly even early before gradual trend away from the fence.

The maiden sprinters kick things off and there are any numbers of chances. Resuming four-year-old gelding 10. Trematon from the Paul Perry yard in Newcastle resumes off two solid trials. Only placed two from 14 starts, but wasn't far away in early runs last prep and bred to get through wet ground. 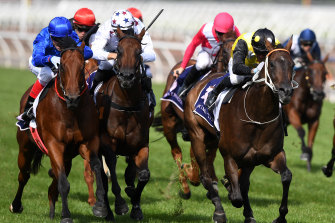 There are nine races on the card at Thursday’s feature Port Macquarie meeting.Credit:AAP

Dangers: Taree four-year-old 9. Sparkling Rose returns from a consistent last prep without a public trial but this is a drop in class for what she’s been used to, although query in the ground if if gets any worse than soft 6. Rival Taree gelding 8. Epaulette Prince has been mixing runs since late last year, but also drops in grade. Scone filly 4. Qukes can bounce back at only third start with the blinkers going on after dropping out badly in heavy ground at Muswellbrook while Newcastle mare 7. Dragon’s Beauty is best of the rest down in weight and drawn the inside.
How to play it: Trematon each-way and trifecta 8,9,10/4,7,8,9,10/4,7,8,9,10.
Odds and Evens: Split.

Another open affair, but liked the way Coffs Harbour mare 4. Supreme Diva found the line from a long way back resuming in the heavy at Taree. Won on debut in soft going last winter and gets conditions to suit again.
Dangers: Five-year-old Scone gelding 5. More Than A Samba has been rock solid all prep, winning his maiden at Gunnedah four runs back before close-up in handy form BM58s in his last couple. Another four-year-old from the Perry stable, 1. Serbelloni, resumes off a tidy trial, and loves to jump and run. Rarely missed a place last prep in stronger company, and draws to have every chance from the inside. After knocking on the door for seemingly an eternity, honest four-year-old Taree mare 8. Peachies Dream finally broke through in the heavy last start, and draws well for her seventh start in 10 weeks.
How to play it: Supreme Diva each-way and box trifecta 1,4,5,8.
Odds and Evens: Split.

Back to the maidens, and surely this is breakthrough time for hot favourite and promising Kris Lees-trained three-year-old 7. Captain Solo who has been very good in two runs this prep from a long lay-off. Kept right up to the mark in a recent trial, and looks the banker to build exotics around.
Dangers: All being equal there shouldn't be any, but improving four-year-old home-track mare 10. Night Terror has been OK in her last few in better races on mainly rain-affected ground, and can run the exacta at a price while another local, three-year-old 9. Stonecold Flex, has been good enough in some deeper races and should work into the finish.
How to play it: Quinella 7 and 10.
Odds and Evens: Split.

Wyong filly 12. Exotic Pearl looks set to break through third-up at only fourth start down in weight. Flew home resuming here behind a handy one, before disappointing going under as a heavily-backed odds-on favourite at Bathurst. First run on rain-affected ground, but bred to handle it.
Dangers: Walcha gelding 1. Balboa can figure second-up despite a sharp rise in weight. Was beaten nearly four lengths into third resuming, but the form is outstanding with smart Pride Of Adelaide then bolting in next start on the Beaumont track by more than seven lengths while Just A Horse won at Cowra on Tuesday. Only query is the ground. Scone mare 9. Les Amoureux has been freshened for this shorter trip after a string of moderate runs in deeper company.
How to play it: Exotic Pearl to win.
Odds and Evens: Split.

Another tricky affair over long journey and heading out wide in the market. Four-year-old Kempsey mare 10. Rizzoli lines up for the 19th time, but has finished strongly behind some very handy gallopers this prep. Gets in light after rider's 3kg claim and looks over the odds.
Dangers: Coffs Harbour filly 13. Just Cosmos has been consistent enough this prep and will likely jump clear favourite. Will get a useful guide through Exotic Pearl who runs in the previous race, although some query if the track gets too wet. Hard to place Newcastle four-year-old 1. Izzat fourth-up from a wide draw. Form is inconsistent, although has the ability and seems to race best when ridden quieter back in the field while former Victorian mare 5. Anamagic has had two modest runs for new local stable, but getting out to a much more suitable distance.
How to play it: Rizzoli each-way and box trifecta 1,5,10,13.
Odds and Evens: Split.

Another competitive Heat of the Rising Star series, with plenty of chances. Progressive home-track four-year-old 2. Acoustix looks well placed from a good draw after working home late in the Country Championship qualifier at Taree. Finished hard to win his previous two and is well capable of carrying the extra weight.
Dangers: Former Victorian mare 6. Tigeen swept home to win in similar ground at the Beaumont track at her first run for the Kris Lees stable, and should hold her form with Samantha Clenton booked to ride, although drawn right off the track. Grafton gelding 4. Real Gent is an absolute swimmer, having never been beaten from four starts on heavy tracks. Led all the way to win his last two, and trainer has removed the winkers, but won’t quite get the bog conditions to suit here. Coffs Harbour six-year-old 1. Northern Knight has kept finding the line well this prep, including less than four lengths from Plonka in the Country Championship qualifier at Grafton, but up to 60kg after the claim from a wide draw looks a big ask.
How to play it: Acoustix to win.
Odds and Evens: Evens.

Wide open and strong race, although progressive four-year-old Newcastle gelding 6. Into The Oblivion can take the next step in conditions he should love. Flew home in a good class 1 at Gosford two runs back before relishing the heavy track at Taree bolting in by nearly four lengths. This is tougher, but drops a significant 5.5kg after the claim.
Dangers: Improving Taree four-year-old 4. Senatorial won two straight at home, both times launching from a mile back, before again finishing hard in a Highway at Randwick over this trip. Won't want to get too far back from the inside draw. Tough Tuncurry gelding 3. Up The Stairs is much better than three wins and nine placings from 29 starts suggests. Hasn’t won for a while, but hit the line hard in some deeper races and beaten only a half-length at big odds in that same Highway although likely to be forced further back than normal from a wide draw. Include underrated Wyong gelding 5. Triple Choice, who attacked the line hard in consecutive BM66s before disappointing in the heavy at Muswellbrook, and four-year-old Scone mare 8. More Spice who charged home to beat a handy one fourth-up, but this is tougher.
How to play it: Into The Oblivion each-way.
Odds and Evens: Evens.

Back to the sprint course for the girls, and there’s plenty of chances headed by former Victorian mare 4. Darmasun who returns from a spell without a public trial in first run for new Wyong stable and has a smart first-up record.
Dangers: Seven-year-old mare 5. Di’s Diamond has always found it hard to win across 42 starts, but can peak here fourth-up after hitting the line late in a stronger race at Scone before a fair closing effort behind a smart one on the Beaumont track. Smart home-track mare 2. Nashian resumes off a long break and quiet trial in a suitable race. Likes wet tracks, and gets in OK at the weights after rider’s claim, but will need some luck first-up from a tough draw. Taree mare 10. Gypsy Queen had hit the line well all prep until a poor run on the Beaumont track last start, while evergreen Grafton mare 9. Teo Torriate has won two of her last four in weaker grade, but generally saves her best for rain-affected ground.
How to play it: Darmasun each-way and trifecta 2,4,5/2,4,5,9,10/2,4,5,9,10.
Odds and Evens: Split.

The boys’ edition wraps up a big card and improving Newcastle colt 5. Spiritual Power can make it two wins from his last three. Was a smart maiden winner two runs back at Muswellbrook before doing best work late in a stronger field on the Beaumont track. Drawn off the track, but that might not be a disadvantage late in the day.
Dangers: Six-year-old Muswellbrook gelding 11. Manno looks well placed from the draw, although a little query in the ground. Stuck on OK after leading behind an extra smart one two runs back before didn’t really hit the line at Scone. Ultra-consistent Wyong gelding 3. Hubble continues to finish off well without threatening the judge and jumps sharply in weight, although this is easier than his last few. Progressive three-year-old 1. Gironde has flown out of the blocks this prep for new Newcastle stable winning both runs this grade, but up to heaviest career weight, unknown in the ground, and less experienced rider takes over.
How to play it: Spiritual Power to win and box trifecta 1,3,5,11.
Odds and Evens: Odds a special.

Tags: and, preview, race-by-race, Tips
You may also like
Latest Posts