Small wonder that Australia felt fenced in. At the Junction Oval, it was by three concentric circles – picket fence, electronic boarding and boundary rope.

In their minds, it was by unseen constrictions, some familiar, some new. One was pressure to perform on a scale they have not experienced before. Another was the rising standard of opponents, creeping ever closer, invading their space.

Perversely, what was confronting for Australia was good for women’s cricket. More attention, a deeper pool, more gravitas: these could only work to the game’s ultimate good.

But tell that to Meg Lanning when the pinches come. 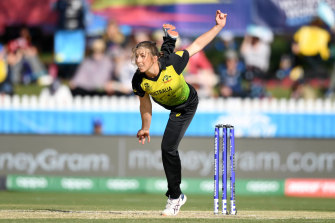 Player of the match Georgia Wareham spins her way to 3-17 against New Zealand yesterday.Credit:Morgan Hancock

At times in the past fortnight, the barbed-wire psychological ring had seemed to tie up the Australians, blanking minds and faces, inhibiting natural play. Even the coaching staff appeared to be listening to the white noise.

Somehow, they’re dealing with it. This was effectively a quarter-final, with all the sudden-death implications. Against New Zealand, they could not fake it as they might have against others; they and the Kiwis know each other too well.

This was three-quarters of a composed performance. Handed the gift of batting first on a true-paced pitch, they lost only the wickets they might have expected to lose in making 5-155. Each wicket in isolation might look reckless in a highlights package, but on the risk-reward scale, with batting always to come, they were justified.

Left-handed opener Beth Mooney was backbone and thread. She is a cricketer’s cricketer, rarely attracting the Perry/Healy/Lanning headlines, but ever reliable. It took a smart Suzie Bates’ catch practically against the sightscreen to get her.

If anything, the Kiwis were too cute. Captain Sophie Devine twirled through seven different bowlers in the first eight overs. It is one thing to have depth, another to use it for its own sake. It meant Amelia Kerr’s hard-spinning wrong-’uns had less effect than they might have.

In men’s cricket, New Zealand often is guilty of trying too hard against Australia. Perhaps the women do, too.

In men’s cricket, New Zealand often is guilty of trying too hard against Australia. Perhaps the women do, too.

T20 cricket is not a game for holding back. Captain Lanning bowled Australia’s best bowlers first, including left-arm spinner Jess Jonassen in the power play. It was only as bold as necessary. It meant that although each of the Kiwis’ powerful top order threatened momentarily, collectively they were always behind the game. It also meant Elysse Perry’s injury hurt less on the day.

It played into the hands of leg-spinner Georgie Wareham, whose player-of-the-match three-wicket collection included Devine and Bates, the two highest-ranked batswomen in the world, and the free-hitting Maddy Green.

Australia were not flawless. There were a couple of misfields that might have proved disastrous another day. Megan Schutt dropped a sitter at cover.

Generally, the fielding across all teams in this tournament has been, well, let’s say variable. But if it has drawn critical attention, at least it means women’s cricket is being taken seriously in its own right and not as patronised sub-set of men’s.

As for Schutt, three late wickets, artfully taken, made the spilled catch a distant memory.

Don’t be fooled by the margin. Some lusty late-order swinging by Katey Martin when all was lost made it look closer than it was. The last ball of the day was Martin’s six, passing through sun-blinded fingertips at deep mid-wicket. Australia had found a way out of its straight-jacket again.

Two more binds await. That’s tournament play for you. One is the Perry injury. She barely shook off one to play in this match; it is hard to see her patching herself back together in time for the semi-final.

The other is Sydney’s wretched weather, which might render all speculation redundant anyway. Bit by bit, Australia has controlled the controllables in this tournament, but in Sydney even that might not be enough. Devine is one thing, the divine quite another.

Tags: as, challenge, Rising, THE, to, wom
You may also like
Latest Posts