Few ever described the temptation of a batter to play at the wide ball better than Richie Benaud. “Drawn into the shot out there,” he’d say as another victim trudged off, “like a moth to the flame.”

After a week in which he trained and drilled as intently as ever, England’s captain Joe Root played with fire throughout an innings that simply had to be a hundred if the tourists were to make a fist of Boxing Day.

Australia’s captain Pat Cummins, back again after an unfortunate dalliance with COVID-19 close contact status in Adelaide, had won a very handy toss for bowlers on a green-tinged MCG pitch and almost immediately made perfect use of it. 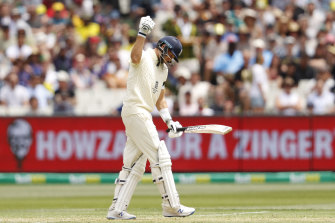 England’s top order, despite considerable reshaping with two changes, looked no more secure than it had been in either of the first two Tests. Haseeb Hameed and Zak Crawley, however lavish their training drills, were about as capable of withstanding Cummins as a Christmas reveller can deny themselves a second serve of pudding.

Taking a new ball he handed to Josh Hazlewood at the Gabba, Cummins got it to seam away and bounce disconcertingly, making a mockery of Michael Vaughan’s contention that England would fare better by being “nastier”. None of Hameed, Crawley or the No. 3 Dawid Malan had any option to ward off Cummins by sledging the balls he bowled.

Which brings us to Root. Self-recrimination had been a theme of his net sessions, where a fourth stump had been driven into the ground to ensure he was as sure as possible of where to play the ball. Like another singular talent, Steve Smith, Root is not shy to admonish himself in training, should he miscalculate even slightly.

While acknowledging the tendencies of Smith and Marnus Labuschagne to leave as many bouncing balls outside the off stump as possible in Australia, Root had also countered that he could not deny his own predilection to score from them with an open bat face. What this required, he reckoned, was a steel trap mind to play each ball as solidly and soundly as possible.

For the first 49 balls of his innings, Root seemed intent upon carrying this through. Despite the seaming, bouncing pitch, the packed Australian cordon and the pressures of the moment, Root played at all but one of them and scored with customary briskness.

He drew some knowing laughter from the MCG crowd of 57,100 when three consecutive Scott Boland deliveries thudded into his back thigh pad or thereabouts – perilously close to the tender spot that had floored Root in Adelaide.

Otherwise, it was only a couple of expansive away seamers from Cummins that beat the outside edge, as Root built the foundations for what he, the Barmy Army – and perhaps even a few Australian spectators – dared to think would be something monumental.

Confidently as Root played, however, nudging the ball down to the third man boundary more than once, he continued to give the Australian pace bowlers the distinct feeling that they were in the game even if they did not target the stumps.

Where Labuschagne and Smith thrust their bats skywards, often with a bellow of “no run” and watch the ball pass, Root kept on playing. Only Cummins, to Root’s 50th and 51st balls, could draw a shouldering of arms.

In the last over of the morning session, with England usefully placed at 2-61, Cummins tried again to tempt his opposite number. Dropping a little shorter and angling from a little wider, Cummins drew out Benaud’s metaphorical moth, as Root fiddled unnecessarily and then exhaled as the ball narrowly evaded the edge.

Malan’s wicket a couple of balls and one single later arrived through another delivery of unimpeachable line and length, essentially forcing the left-hander to play by pitching in line and raising the possibility of nip back for an lbw or bowled.

Back from a light lunch, Root twice worked Boland to the boundary around and through the slips cordon, but then flirted again and was beaten. As had been the case throughout, Cummins, Boland and Mitchell Starc were kept hopeful.

In the end it was not to be Cummins who ended the saga, as much as his pressure and bowling changes helped bring it about. Starc had been sparingly used in the first session and looked somewhat uncomfortable due to the way he’d tweaked his back when batting in Adelaide.

His angle across the England batting line-up has tempted them in ways recalling another left-armer, Bruce Reid, in the now distant summer of 1990-91. As Root’s concentration briefly relaxed upon reaching 50, Starc limbered up for another set of six balls slanted towards the slips.

Root played at each of the first five, seemingly comfortable at the crease and in the fact that, on a tough day for batting, he was giving as good as he got. To the sixth, shorter, wider and no threat at all to the stumps, Root could not help but play again. The edge was thin but clear, Alex Carey’s gloves safe, and Australia exultant.

Having punched his bat in frustration when edging Cam Green in Adelaide, this time Root swished his bat at the ground in exasperation. He tried, oh how he tried, to do things his way on Boxing Day.

But for Cummins and Australia, it has become increasingly clear across the series that is exactly the way they want him to play. In the symmetry of his dismissals this series, Root is starting to resemble an English Shane Watson – everyone seems to know what’s coming.