Marnus Labuschagne will use his two-month head start on India's strike weapon Jasprit Bumrah to hard-wire his game and stay one step ahead of the pack aiming to short circuit Australia's newest run machine.

The sensation of the international game in the 2019-20 season, Labuschagne knows bowlers around the world will throw up new strategies in a bid to find a weakness. 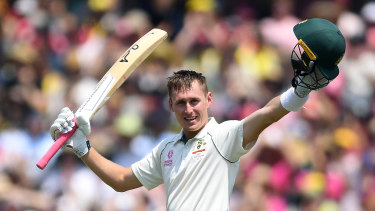 Marnus Labuschagne is a new star of the Australian top order.Credit:AAP

"For me personally it's about getting better and coming up with really trying to think about how they're going to attack me, what they will do to try to get me out and how I will counter that," Labuschagne said.

"If that's the short ball or if that's having a few more catchers on the leg side or hanging it wider on the off side, whatever their plans are going to be, I think it's important as a cricketer that you're one step ahead and you're trying to understand what they're going to do and how they're going to attack you."

Labuschagne gets his first taste of life as the hunted this weekend when he takes on his Test captain Tim Paine in a Sheffield Shield game against Tasmania.

If they lack the quality of a Bumrah, it is matched in terms of their knowledge of Labuschagne's game.

"I love the contest – I want to score runs and they want to get me out," Labuschagne said.

"They're going to come up with plans, they've played against me for the last four years and they understand how I play, so they're going to come prepared and I think that's the exciting part, you have to be one step ahead and be really clear on how you want to play the game."

Labuschagne has worn the baggy green only once against India, giving close watchers an early insight to his ability with a hard-earned 38 at the start of last year, and is now a far more accomplished player.

The world's third-ranked Test batsman may not have the longevity of Smith, Virat Kohli or Kane Williamson but his wicket has become as eagerly sought after he announced himself as a major force in the game.

A cricket tragic, Labuschagne has kept a close eye on his adversaries in the IPL for any cues for the summer.

"You look at how their bowlers are bowling, and it kind of makes you think about what they'll do, how Bumrah will bowl, what Shami will do, what those guys will do," Labuschagne said.

"Maybe it's more of a subconscious thing, so you're not necessarily thinking about it directly, but it's turning over in the background, what you might do, what plans they might have for you."

Tags: Labuschagne, lookin, Run-machine
You may also like
Latest Posts