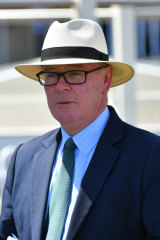 Racing Victoria's integrity team will reach out to its American colleagues after 27 people were charged in the US on Monday night in relation to what authorities have described as a widespread doping operation.

Jason Servis, the trainer of one of the world's best horses Maximum Security, is among the trainers, veterinarians and drug distributors embroiled in the FBI investigation.

Servis has been charged with administering performance-enhancing drugs to his champion three-year-old and "virtually all the racehorses under his control" according to the US Attorney's Office in the Southern District of New York, in races stretching from New York and Kentucky to the United Arab Emirates.

Maximum Security won last week's Saudi Cup, the richest race in the world – worth more than AU$15 million to the winner – and was the first past the post in last year's Kentucky Derby before being demoted on protest.

The peptide, allegedly undetectable in American racing, is known as SGF-1000.

Racing Victoria's executive general manager of Jamie Stier said he had been aware of SGF-1000 for about five or six years. He said Flemington's racing laboratory routinely screens for peptides, among many other tests, and that those tests would pick up SGF-1000 .

Stier said there have never been any positive tests to SGF-1000 in Victorian racing, but "we've had reported positives to Dexamethasone", which allegedly shows up as a false positive for SGF-1000 in American testing.

However, Stier said he was confident Racing Analytical Services Limited's test differentiates between SGF-1000 and 'Dex'. He said his integrity team would be sure to discuss the revelation when it next meets.

"No doubt it's a big story so we'll speak about it," he said.

"At some stage, we'll reach out to our colleagues in America. But the existence of SGF-1000 has been known for some time."

Also involved in the scandal is trainer Jorge Navarro, who was allegedly caught on phone taps with Servis discussing the use of SGF-1000 on their horses.

Tags: colleagu, out, reach, RV, to, US
You may also like
Latest Posts