Spicer Thoroughbreds will lean on the likes of AFL champion Dane Swan in order to attract All-Star Mile votes for their unbeaten four-year-old gelding Mystery Shot.

The Lindsey Smith-trained galloper is one of two from the stable already nominated for next year's $5 million race, the other being Saturday's Kingston Town Classic contender Too Close The Sun.

Mystery Shot is expected to have a jump out in the next week or two after stringing together five wins on end as a three-year-old, but Brad Spicer says connections won't rush him to the highest level. 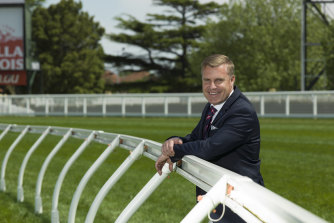 "We always had this [All-Star Mile] in the back of our mind, that we might skip the spring, give him a good break, because we were sort of caught in no-man's land there in that late winter period," Spicer said.

"It was either give him a short break and aim towards a Rupert Clarke and see if he's good enough, or do we give him a long break and do the right thing by the horse and give him a shot at the All-Star Mile in the autumn?

"I just think with his rating, he's still a lowly-rated horse so we can try and pick our way through some benchmark races early and see where he's at because you want to see how much improvement he's made. He's got to jump from three-year-old grade to four-year-old … he's got to make that transition so hopefully he can."

But to get into the richest mile race in the world – to be held at Moonee Valley – he'll need to finish in the top 10 in voting, or otherwise earn a wildcard from Racing Victoria, which are usually allocated to group 1 winners.

It's all about calling on the friends with huge followers. It's turning into a digital marketing campaign for these sort of horses now and you've got to look outside the square and try and get enough votes to get into the race.

"We're trying to lean on all the friends who have got big, big followings. One of the boys is tight with [Collingwood great] Dane Swan, so he's going to call Swanny and see if we can do a campaign through his social media and what not," Spicer said.

"It's all about calling on the friends with huge followers. It's turning into a digital marketing campaign for these sort of horses now and you've got to look outside the square and try and get enough votes to get into the race."

One horse which would warrant wildcard consideration, should he win a group 1 on Saturday, is Too Close The Sun.

The five-year-old has won eight of 17 races and relished the step up in class last start, finishing second in the Railway Stakes to Inspirational Girl.

Too Close The Sun will jump second-favourite in Saturday's $1 million race over 1800 metres, with Inspirational Girl again the horse to beat.

Tags: at, Mystery, N, plans, shot, Spicer
You may also like
Latest Posts