Australia are under the pump and Sri Lanka aim to cash in on the pressure on the hosts when they meet in Monday's key Women's T20 World Cup clash at the WACA Ground.

Friday night's shock opening loss to India means Australia probably need to win all three of their remaining group games in order to qualify for the semi-finals. 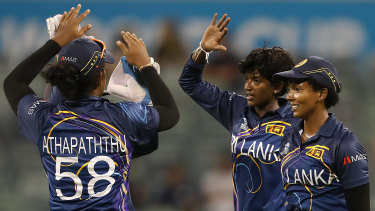 Kavisha Dilhari of Sri Lanka celebrates the wicket of Suzie Bates of New Zealand in Perth.Credit:Getty

Sri Lanka are ranked eighth in the world, and on paper shouldn't pose much of a problem to the defending champions.

But Sri Lanka are more than capable of pulling off an upset – as shown by their two displays over the past week.

They beat world No.2 England by 10 wickets in a warm-up match.

And they could have beaten world No.3 NZ in their World Cup opener on Saturday if they had held onto some crucial catches in the field.

Sri Lanka coach Harsha de Silva said his team would be up for the challenge against Australia.

"I think we all agree that Australia is one of the favourites," de Silva said.

"It's hard for me to say from this side of the fence, but I'm pretty sure there must be pressure on them – playing at home and also losing the first game.

"We are up for a challenge, we know every game is going to be pretty tough – especially in our group.

"It's always going to be a daunting task to make the top two in that group. But that's what we train for, to challenge and hopefully to win."

Tags: capable, Lanka, of, prove, sho, Sri
You may also like
Latest Posts