Jamie Richards labelled it his best day as trainer after Te Akau Shark confirmed his potential by winning the Chipping Norton Stakes to make a group 1 double from New Zealand trainer at Randwick on Saturday.

Te Akau Shark was the Epsom runner-up and Cox Plate placegetter in the spring and came to Randwick loaded with expectations. He delivered with an enormous turn of foot to take the group 1 weight-for-age mile. 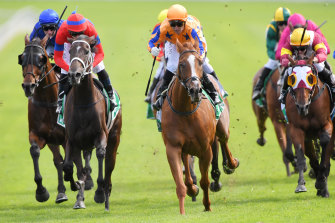 Te Akau Shark rounds them up and runs clear in the Chipping Norton Stakes.Credit:AAP

‘‘I thought it couldn’t have got much better than the Karaka Millions double but I just think it has,’’ Richards said.

“He has always had that potential, and for him to win a group 1 here, means we don’t need to use that word anymore. To have Probabeel win the Surround Stakes as well, it is just a great day.”

Richards was aware of another gelding making a name for himself in Alligator Blood, which won the Australian Guineas at Flemington.

‘‘It’s just so exciting for racing to have a couple of horses like this bloke and Alligator Blood, two geldings that are going to race on and promote our sport,” he said. 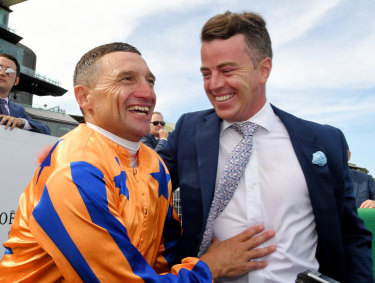 Richards and stable jockey Opie Bosson embraced with the smiles telling the story, but both headed straight to the airport.

“If we stay here I don’t know when we would get home – it has been a big day,” Richards said. ‘‘He can do things other horses can’t, that’s the difference.

‘‘He’s something special . . . I said to Opie, ‘just don’t be as far back as you were on Probabeel’, but he ended up back in a sticky spot. But when he gets on his outside leg and he gets a bit of clear room he can really charge late.’’

Bosson gave the Randwick crowd a taste of why he has won more group 1s than any jockey in New Zealand with two nerveless group 1 winning rides that showed a belief in the horses he was on. 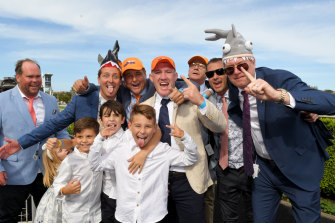 He could have ridden Dragon Leap in the New Zealand Derby but he was never going to give up the ride on Te Akau Shark.

“It’s amazing. It’s hard enough to get a ride here, let alone win two group 1s,” Bosson said. “He’s got stronger this time in. He’s just so laid back about things, too.

“He doesn’t know how good he is. He is untapped still.”

Te Akau Shark was 10 lengths off the speed set by Dreamforce coming to the turn, but when he dropped into another gear there was a confidence about Bosson.

“Once we balanced up in straight, I knew we’d pick them up,” he said. “When they quickened up they just left him a bit flat-footed but he just keeps grinding through those gears.

“It was great and there’s plenty more to come.”

There were no excuses for those behind him, and Te Akau Shark will not be starting near the $2.90 that was available yesterday.

Richards will follow the Winx path with Te Akau Shark, gong to the George Ryder Stakes and then the Queen Elizabeth Stakes as long he can keep him together.

“He is not a day-to-day proposition, but we kept an eye on him,” Richards said. “He has a bit of arrogance about him. He’s grumpy, he’s just one of those horses that knows he’s pretty good.

"He’s not a fantastic eater, he’s not a big strong horse. He’s pretty lean and mean but he has a big ticker. We manage him and look after him. He is very exciting.”

Te Akau Shark is part-owned by rugby league great Paul Gallen, who was on hand to celebrate the win.

‘‘What a thrill. I love a day at the races but I don’t know a real lot about horse racing. I’m just so thrilled to be here,’’ Gallen said.