Emerging teenage superstar Shafali Verma put on a show and ensured India will head into a Twenty20 World Cup semi-final flush with confidence, having finished undefeated through their pool matches.

The Indians on Saturday claimed their fourth win to finish on top of the table of group A, this time with a seven-wicket victory against winless Sri Lanka at Melbourne's Junction Oval, and now head into the knock-out stages as arguably the tournament favourite. 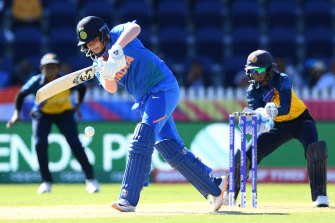 Teenager Shafali Verma led the way for India with 47 runs off 34 balls.Credit:Getty Images

Left-arm spinner Radha Yadav claimed 4-23 off four overs, as Sri Lanka were held to only 9-113, a chase India completed in 14.4 overs.

"As a bowling unit, I hope we can keep this momentum going," Yadav, the player of the match, said.

On a slow, dry pitch, Verma, the 16-year-old batting sensation, set the tone by stroking the opening delivery for four through the covers although she was soon given two lives in a terrible display of fielding – an issue among several nations this tournament.

Verma (47 off 34 balls) made the most of her good fortune and was largely responsible why India completed a successful chase so quickly. She took 14 off three balls from slow bowler Shashikala Siriwardena, including a sumptuous six down the ground, while there was a belligerent cut for four off middle stump off Kavisha Dilhari, also a so-called spinner.

Then came one of the more unorthodox shots seen in any form of men's or women's cricket, when she stepped so far back to be all but behind the stumps next to the wicketkeeper before clipping Siriwardena to the leg side for four. She appeared set for her maiden half-century of the tournament and third of her career but was run out chasing a single. 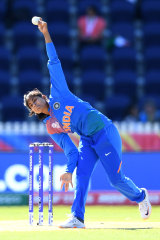 India have yet to claim a women's T20 World Cup title in six appearances but if Verma can replicate this form over the next week, that could well change come next Sunday's final at the MCG.

They now appear likely to face either South Africa or England in one of two semi-finals to be held in Sydney on Thursday.

What the Indians will hope for, though, is that skipper Harmanpreet Kaur can find form, having threatened to do so before falling for 15 – her highest score of the tournament to date – against Sri Lanka. She had managed only 11 runs in her three previous innings.

"I was looking quite positive … hopefully in the coming games I can play my best," Kaur said.

Earlier, while Radha Yadav dominated, leggie Poonam Yadav, already the leading wicket-taker through the tournament, was again tough to handle and claimed one wicket. Sri Lanka had been in a strong position at 2-47 but lost a batch of wickets to halt what had shaped as a challenging score.

Tags: on, puts, sho, star, Teenage, Verma
You may also like
Latest Posts