Peter Moody scoffs at any suggestion there’s a “gaping hole” in his training resume.

“Someone said to me the other day, ‘The gaping hole in your career on your CV is not winning one of the big four races – the Cups or the Cox Plate or the Golden Slipper’,” the four-time premiership-winning trainer says. 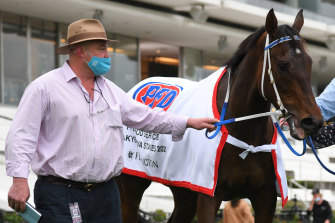 Trainer Peter Moody with Incentivise after victory in the Makybe Diva Stakes.Credit:Getty Images

“I said, ‘that’s wrong.’ I said, ‘there’s only one gaping hole on my CV and that’s the six-month suspension I got for what I believe to be a bullshit saga five years ago’. That’s the only gaping hole in my CV, not winning the Cups.”

The larger-than-life trainer saddles up Incentivise in Saturday’s $5 million Caulfield Cup, about 18 months after returning to training from a stint out of the sport.

Before that, Moody dominated the Victorian racing ranks, collecting 53 group 1 wins including 15 with the unbeaten mare Black Caviar, who took on the world at Royal Ascot and won.

A six-month ban for presenting a horse to the races with cobalt in its system turned into four years when Moody, disillusioned by those in charge at the time, decided to take an extended break from racing, one that he never promised to return from.

But his reincarnation via Pakenham is in stark contrast to what life was like the first time around at the “hustle and bustle” at Caulfield.

At the peak of his powers, he trained 120 at Caulfield, had another 25 at a Sydney satellite, managed a further 100 in pre-training and also had another 100 in the paddock.

Now, his boutique stable consists of 40 or so in the barn and another 25 to 30 in pre-training.

“I love it, it’s great. Great facilities, good people, good fellow trainers and staff out here. It’s a great training set-up, and it’s a real good-natured place to train. There are good people around you, not only in your own place but around you. It’s very enjoyable.

“We haven’t got the hustle and bustle of trying to get everything done and on time frames and that. We just cruise along, it’s more relaxed, the horses are more relaxed. The whole place has just got a great demeanour about it really.”

Wife Sarah remains at Peter’s side, but instead of running the books five, six or seven days a week, her two days a week is also giving her a quieter, more relaxed work-life balance.

Experienced racing manager Jeff O’Connor, who has been on and off with Moody for 15 to 18 years, is still riding shotgun, while Katherine Coleman is the glue to the stable as Moody’s assistant trainer. 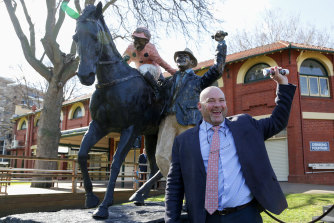 Moody at the unveiling of the Black Caviar statue at Caulfield in 2019.Credit:Getty Images

Moody always hoped a horse like Incentivise would come along and give his stable the kickstart it was looking for. But never did the knock-about trainer think a horse from out bush in Queensland would take to Melbourne’s weight-for-age ranks in the style he has.

Wins in the Makybe Diva and Turnbull Stakes have Incentivise well established as the $2.50 favourite in Saturday’s race.

“You always hoped to have a nice horse because it puts a bit of a spring in your step, but it puts a spring in everyone’s step,” Moody says.

“Even the average horses seem to get up and going when you’ve got a nice horse.

“Obviously with restricted numbers it lessens your chance of finding that good horse, but I was fortunate enough the way these boys put together this deal, to take a half share in the horse and [decide to] come to me to train.

“I don’t think anyone expected him to go bang, bang and win two group 1s, even [his first trainer and part-owner] Steve Tregea. I think everyone’s been pretty surprised with the way he’s progressed, but we’re happy to put up with it.”

It was prominent owner Brae Sokolski, whose silks the horse now adorns, who got the ball rolling on a partial takeover of Incentivise.

Sokolski was looking to make Incentivise the big fish in a small pond, and Moody’s boutique operation, coupled with the fact “Moods” had previously dealt with the media scrutiny around Black Caviar with ease, made the Queensland-born trainer a perfect fit for those.

“He looked a nice horse, didn’t he? He won that race at Eagle Farm by nine or 10 lengths or whatever, and I’d seen a few media reports on him, but it never crossed my mind someone would ring me and suggest they’d try and buy it,” Moody says.

’I’m pretty bloody happy they did.

“But it was the furthest thing from my mind when I’d heard this unheralded horse had just won a race in Brisbane.”

Moody says it hasn’t been lost on him that a trainer, born in outback Queensland in a town of fewer than 100 called Wyandra, would be partnering a horse who has emerged from country Queensland to Caulfield Cup favouritism.

“It’s a great thing for Darling Downs and Toowoomba; there wouldn’t be too many displeased or not cheering for him on the weekend,” he says.

“It’s a great thing to see one of their born, raised and reared and trained there for most of his career to come down here and try and get the job done in one of the big ones.”

With the stars aligning, Moody is on the verge of knocking over one of those “big four”.

But if things don’t go his way on Saturday, it’s not something he’s going to lose sleep over.

“Listen, I would love to win a Caulfield Cup because it was my home base for a lot, a lot of years, so that would have a nice feel,” he says.

“But I don’t fall asleep of a night dreaming of winning a Caulfield Cup or a Melbourne Cup or a Cox Plate. Would I like to win one? Shit yeah.

“[But] it hasn’t changed the way I sleep at night. I’ll still have a big bottle of XXXX and a steak tonight and get on with life.”

Tags: ‘gaping, hole’:, in, Moo, Peter, THE
You may also like
Latest Posts