The teenage wicketkeeper who ran out Tim Paine for one in a Tasmanian grade cricket match on Saturday says he draws inspiration from the Australian captain's late-career ascension.

In the absence of Sheffield Shield cricket, Paine, who turns 36 next week, shaped up for the upcoming Test series against India by playing a couple of Twenty20 matches on Saturday for the University of Tasmania in the Cricket Tasmania Premier League. 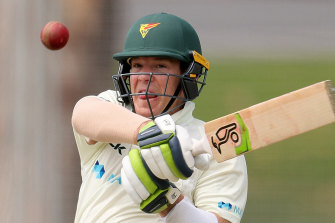 Tim Paine was run out for one.Credit:Getty

Paine only batted once, run out for one from four balls against the Greater Northern Raiders.

He was removed by a man little more than half his age. Raiders gloveman Sam Elliston-Buckley talked down the dismissal when asked about it on Sunday.

"Jake Doran blocked it at the stumps and Tim Paine was at the non-striker's end and called 'yes' and I think he misjudged it a little bit. It rolled to me and I just underarmed a two-metre throw at the stumps and ran him out. It caught me off guard a little bit but it was good to get him out."

Did the youngster have any words for the Australian keeper?

"I don't think I'm that good at cricket to sledge him, so I just let it go."

Elliston-Buckley said his teammates had been surprised to learn on Thursday night that they would be going up against the national skipper.

"Obviously it was a bit of a shock seeing his name on the team sheet to start with. But it was a great experience. I've always liked the way Tim Paine goes about his cricket. So it was great for me as a keeper as well.

"Seeing how he was almost down and out with his cricket, and then made that big comeback, pushed his way into the Australian side, it really shows you can push for that spot no matter how far you think you might be behind everyone else. I've kind of missed out on a few state squads but it still gives me hope to push for Tassie sides and even the Australian side."

Unfortunately, Paine couldn't stay to chat after the match, needing to play a second game against Kinborough. The Raiders team returned to their Launceston base, so Elliston-Buckley didn't have a chance to talk to the veteran.

While Paine dabbled at the lower level, fellow red-ball specialists Will Pucovski and Joe Burns had the weekend off ahead of their bat-off for Australia A against the tourists. Burns is under pressure to keep his spot at the top of the Australian order following the Victorian Pucovski's extraordinary start to the Shield season.

Tags: a, by, for, one, out, Paine, run, tim
You may also like
Latest Posts