Track likely Good 4 and rail out 2m from 1200m to 350m into a cut/away so predominantly on-speed before levelling out.

The babies get us underway in a field or nearly all first starters. Hard to see one of the Bjorn Baker-trained fillies from Warwick Farm not winning on debut off the trial form. Leaving to 6. Hybrid Theory (Brazen Beau x Belle's ready by More Than Ready despite the wide draw. Looks ready to fire off latest good quality trial, and top country hoop takes the ride.

Dangers: Stablemate filly 7. Paperscissorsrock (Scissor Kick x Diamonds Of Dubawi by Dubawi) also trialled forward on the same day behind a nice horse; while Wyong filly 8. Rose Sauvage was well beaten on debut at Randwick behind smart Rulership, and will obviously find this much easier.

How to play it: Hybrid Theory to win
Odds and Evens (First 2): Split 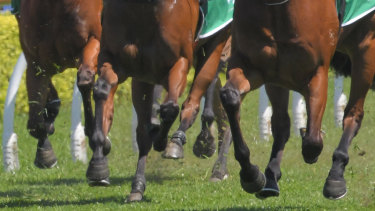 Potentially strong form maiden over same trip that should be dominated by the 3YO's. Improving Hawkesbury gelding 4. Uprise is the one to beat after just missing here third-up when heavily backed. At peak fitness, and draws to get the right run.

Dangers: Confident Wyong gelding 2. Henschel can rebound after narrowly missing a place as an odds-on favourite first-up at Scone. Has plenty of natural ability, and that was his first run in nine months. Another one from the Baker team, lightly raced gelding 1. Green Jacket set the speed and stuck on okay resuming here a fortnight ago. Fitter now, and should be in the finish, and was scratched from Goulburn on Sunday. Watch the market on debutant Dubbo gelding 3. Toulon Factor (The Factor x Toulon Bay by More Than Ready) who has early pace, and bolted in a heavy track trial at Gilgandra. Was due to start early last week before being scratched; while Warwick Farm-based former SA filly 11. Troodles debuts for strong metro stable, and has trialled okay.

How to play it: Uprise to win and quinella 2 and 4
Odds and Evens: Evens

Resuming 3YO Randwick gelding 2. Well Known looks very hard to beat off his trial work. Cruised home over 1250m in the most recent, so this trip fourth-up is no concern. Took on stronger last prep, and draws to roll forward.

Dangers: Warwick Farm 4YO mare 9. Nodeel is the clear threat off her first-up run here when doing her best work late. Bred to get much further, but from the good draw, only needs a solid tempo to trail and will be charging home. Another one from the Far, 3YO filly 11. Saturn has been up for a while and mixing her form, but will find this more to her liking from the inside draw.

How to play it: Well Known to win and quinella 2 and 7
Odds and Evens: Split

Moderate and tricky battle over the longer journey, and there's plenty of chances. progressive 4YO Dubbo gelding 2. Mayaman can make it two from his last three despite a sharp rise in weight. Powered over to beat a similar field at home over the mile two runs back before again finishing well in a Highway at Randwick when easy in betting. Draws to get a soft back in the field, and can be saved for one final surge from the 600m.

Dangers: Hawkesbury 4YO gelding 1. Little Arnie careered away to win a Class 1 at Canberra two runs back before couldn't hang on leading a much tougher race on heavy ground at Canterbury. Back in grade, hard fit, and not badly off at the weights after rider's claim. Warwick Farm mare 7. Eye Will was disappointing as a short-priced favourite here last start, but can peak fourth-up this prep for leading metro stable who preferred here to Goulburn on Sunday. Similar to top selection, 5YO Wellington gelding 4. Reward Seeker likes to drift back and finish hard. Has just missed this grade over the mile in his last two, and extra trip is ideal; while improving Hawkesbury mare 3. Also Cool swept past Eye Will to win here, but goes up 4kg, and drawn wider.

Same grade back in trip. Consistent 5YO local gelding 6. Skipper Joe has been in and around the money all prep, often against stronger opposition. Draws to get a lovely run on-speed, and this distance looks ideal.

Dangers: Good quality 4YO stablemate 1. Alcatran has been given an eight week freshen-up, and normally reacts off any break. Trialled okay, draws the inside, and huge weight off-set by rookie rider's 4kg allowance. Improving 3YO Warwick Farm filly 7. Just Jessie loomed to win second-up in a Class 1 here, but just peaked on the run. Has enough ability and was scratched from Goulburn to be saved for this, but a query over a further 200m. Dubbo 5YO gelding 2. Adsum loves to go right back and finish with a wet sail. Did just that two runs back at home in similar race before again flying home late in a Class 2. Needs the speed on up front, but nowhere near as suited on this track as his home course.

How to play it: Skipper Joe to win
Odds and Evens: Split

Very keen here on lightly raced 3YO Dubbo gelding 6. Jailbreak who resumes in blinkers off a six month spell and a trial. Competed against stronger last year, and draws to get a nice position right behind the speed.

Dangers: Promising 3YO gelding 2. Daredevil from the Snowden yard at Randwick is knocking on the door after hitting the line from well back at Gosford in his last two, but won't want to drift too far back from the inside draw. Local 3YO filly 9. Press Week was out-gunned in a tougher Class 4 here a fortnight back, and is drawn wider, but little drop back in trip is a plus. Talented 4YO Wyong mare 5. Pluck And Lucky hasn't started since a brilliant first-up win motoring home at Scone more than three weeks ago, but draws the outside barrier, and will find it much tougher coming from well off the speed here; while don't dismiss home track 6YO mare 7. Missile Miss at big odds after finishing well in her last two, the most recent behind a smart one who has won his last two.

Emerging 3YO Randwick filly 3. Oaksastar can go back-to-back after a dominant first-up win at Muswellbrook when well backed. Tougher draw here, but has more scope than the rest, and winkers replace blinkers for this.

Dangers: Hawkesbury 3YO gelding 5. Nevada Sunrise made a fair return just over three weeks back, and only career win so far came at this track last winter. Draws to get a nice run around the speed. Improving 4YO Scone mare 8. Pure Faith bolted in second-up on the heavy at Gilgandra, and while this is tougher, drops 2.5kg in weight. Warwick Farm 3YO gelding 1. Antarctic Ocean didn't quite finish off resuming here over the same trip, but fitter, with more experienced rider going on.

How to play it: Oaksastar to win
Odds and Evens: Odds

Tags: and, preview, race-by-race, Tips
You may also like
Latest Posts