With the highest ever individual Big Bash score leading the way to the biggest team total in competition history, it just had to be Glenn Maxwell front and centre.

If it was anybody else reaching triple figures at a strike rate of 240 at the MCG, the feat would be simply unbelievable. But not for Maxwell – the man capable of just about anything on a cricket field, particularly in the shorter format. 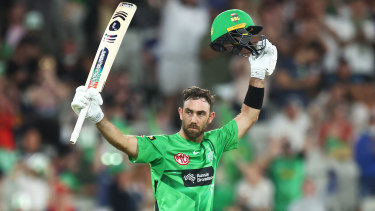 Brutality: Glenn Maxwell bludgeoned a mind blowing 154 not out in a Big Bash record innings.Credit:Getty Images

Cricket’s great current-day entertainer was in full flight with a range of brutal drives and creative switch hits as he pounded the Kookaburra to all parts, recording a staggering 154 not out from 64 deliveries, leading from the front for the Melbourne Stars against the hapless Hurricanes. Their total of 2-273 eclipsed the previous BBL record of 5-232 from the Thunder against the Sixers last season.

Fittingly, Maxwell marked his 100th Big Bash game with his second century in the competition, reaching the milestone in blazing time. The second fastest in BBL history, in fact.

But he wasn’t done there. Nowhere near it.

With the powerful Marcus Stoinis at the other end, and with eight wickets still in hand and plenty of overs remaining, Maxwell went berserk well beyond the 100 mark, one-upping Stoinis’ previous competition record of 147.

It looked more like something out of the Stick Cricket video game as he roared past 150.

Maxwell took just 20 balls to reach his first fifty, and another 21 for his second as all eight Hobart bowlers used went for more than 10 runs per over. 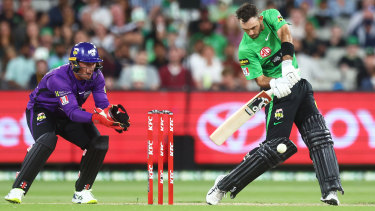 Maxwell dominated a Hurricanes attack that simply had no answers.Credit:Getty Images

There are few more spectacular sights on a cricket field than Maxwell in full flight, and he provided just that to those lucky enough to be at the MCG to witness it.

This time around, Stoinis (75 not off 31 deliveries) was the Robin to Maxwell’s Batman, providing the perfect foil in their 132-run unbeaten partnership as the scoreboard continued to race along.

Though the 33-year-old Maxwell was visibly tiring towards the end of his mammoth innings – at stages walking between the wickets – he still continued to find the middle of the bat, sometimes while wielding it with only one hand.

Walking out to the field in the Hobart chase, fellow big-hitting Star Beau Webster summed up Maxwell’s magic perfectly.
“It’ll be a long time before we see something like that again,” he said.
“It was pretty outrageous.”