A dozen Golden Slipper winners have walked out from Tulloch Lodge and the formula remains  pretty much the same to find that gun two-year-old.

It needs to be precocious and talented and ready to mould into a racing machine. 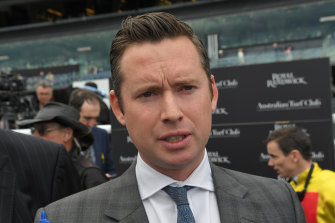 Then comes the first preparation, which is about experience, before Christmas allowing time for a break before the final Slipper charge.

“They need to stand up now and that’s what we are looking for Postcode and Dubai Star and maybe even Vangelic, which runs in Melbourne on Saturday, in the next couple of weeks.”

Tommy Smith made two-year-old racing his own through his career, winning the Golden Slipper on six occasions and his daughter Gai Waterhouse matched that mark before going into partnership with Bott.

She wants that seventh win and will have Farnan there on Golden Slipper day. The stable believes he could have company in Postcode, which was runner-up in the Breeders’ Plate and Victory Vein Plate in the spring. He will look to win his way into the Slipper in Saturday’s Skyline Stakes.

“He was a colt that was doing it on ability in the spring. The good always show themselves early,” Bott said. “Both his races were over 1000m, which didn’t really suit him but he was still able to be competitive.”

Postcode ran home his final 600m in 33.40 seconds in his second trial and appears primed for a winning return.

“He has taken the right steps in his time off and we really gave him a good hitout in his last trial, so he is ready for this 1200m on Saturday,” Bott said.

“He is going appreciate the extra trip and and may even get over further this campaign, but the Golden Slipper is a race you have to target with a colt like him.”

Dubai Star carries form through Golden Slipper favourite Hanseatic, whom she was runner-up to in the Merson Cooper Stakes on debut in November. She was sixth in the Inglis Nursery after a wide passage before a break and was impressive winning a trial.

The Pride of Dubai juvenile is likely to run in a Canterbury maiden and wait for the Magic Night Stakes to make a late grab at a Slipper spot.

“She has only had the one trial and the plan is to run this week and then head to the Magic Night in a fortnight,” Bott said.

“She could get a bit of confidence from Canterbury and it would have her ready for 1200m in a couple of weeks.

“She has always been a very good filly, whether the Slipper comes a bit quick for her is a problem but there are plenty of races around.

“She could even end up in the Percy Sykes Stakes during The Championships, but she wouldn't be out of place in the Slipper. She will probably need to win the Magic Night to get there."