Cricket will step closer to a future resembling international soccer when Twenty20 powerhouse Tim David is included in the Australian squad for the home World Cup on Thursday.

Under terms not considered since the earliest days of David Warner’s career, 26-year-old David is set to play for the national Twenty20 side as an uncontracted freelancer on match payments, affording him greater latitude to play short-form leagues around the world. 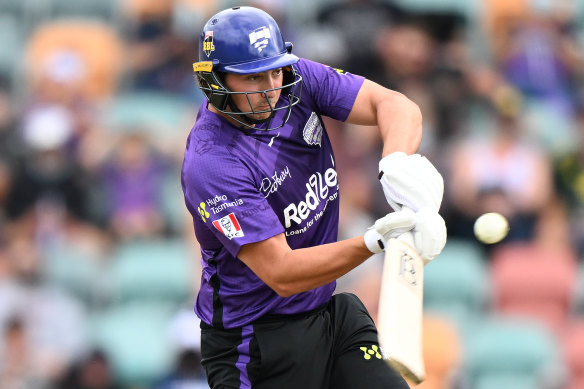 Within a few days of the World Cup final on November 13, as the vast majority of the Australian squad moves on to ODI or Sheffield Shield duty, David will be flying to Abu Dhabi for the global T10 league, where he was this week signed as a platinum pick by the Delhi Bulls.

Provided David plays fewer than the 12 Twenty20 internationals a year that would automatically place a Cricket Australia contract in front of him, his arrangement will mirror the way in which international men’s soccer players, such as the Socceroos, are contracted to clubs but only play for their country when available.

Should Australia reach the Twenty20 World Cup final at the MCG in November, the maximum number of games they can play this season – including an away series against India and warm-ups against the West Indies and England – is 15 matches. Players are paid about $10,000 per game.

While New Zealand’s Trent Boult and Jimmy Neesham recently took on similar arrangements to gain more flexibility, and the likes of Matthew Wade and Kane Richardson will be part of the Cup squad despite missing the contracts list earlier this year, no Australian cricketer has previously explored such parameters at the outset of their international career. As such, David’s selection may be a game changer in terms of how other players prioritise formats and contracts.

David, who first built his reputation through turning out for Singapore, where he was born, might have had a more conventional path. He earned a rookie contract with Western Australia in 2018-19, but then suffered a foot stress fracture and was left out. Since moving to the Hobart Hurricanes, David has played one 50-over game for Tasmania. He also played 50-over games for the English county Surrey last year, making two hundreds in 10 games.

Were David to sign a CA or state contract, he would be required to train and play in Australia between the months of September and April unless expressly permitted to do otherwise by the governing body. Without one, he is much freer to plan his year.

Currently, David has deals in the Indian Premier League (worth $1.5 million a season), the Pakistan Super League, the Hundred in England, the Caribbean Premier League and the Abu Dhabi T10, in addition to his Big Bash League contract with the Hobart Hurricanes. He has not signed to play in the new UAE Twenty20 league.

The timing and manner of David’s inclusion for Australia has been a matter of discussion for him, his management, and the national selectors for some months. Initially, selection chair George Bailey had wanted to include David in the squad for a Twenty20 series at home to Sri Lanka in February.

However, it was agreed that David should be allowed to take part in the PSL during the same window, rather than essentially being chosen as a spare batter for Australia. That move aided his big-money purchase in the IPL auction and subsequent exposure on the Twenty20 circuit’s highest quality stage.

By performing strongly for Mumbai Indians, David more or less sealed a spot in Australia’s World Cup squad, most likely at the expense of Mitch Swepson, the third spin bowler chosen for last year’s tournament in the UAE. Just how he fits in the playing XI that lifted the trophy in Dubai last year remains to be seen.

While David’s quest for flexibility, alongside the success of Chris Lynn in playing in both the UAE and the BBL this summer, takes cricket closer to a future where T20 contracts provide the bulwark of income for a greater number of players, it is also a mirror of the discussions about Warner when he first made his mark on the game.

Over a decade ago, Warner was considered the brightest young star on the Australian T20 scene, with BBL organisers hoping he would be the dominant homegrown player in the tournament alongside his burgeoning IPL career. 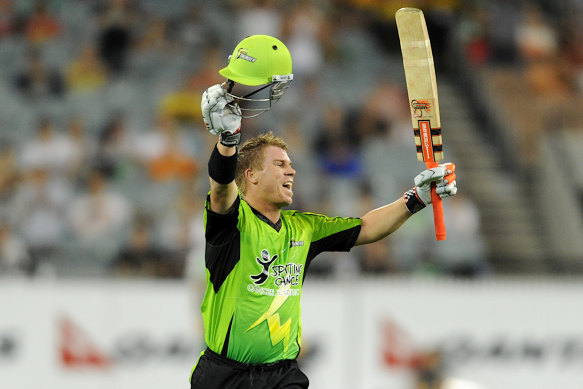 David Warner in action for Sydney Thunder in the Big Bash in 2011.Credit:Pat Scala

However, it was at the insistence of then selector Greg Chappell that Warner was fast-tracked into the Australian Test squad, meaning that by the time the BBL launched in December 2011, he had already received a baggy green cap and was thus unavailable for most of the competition.

This time around, the one similar consideration for David and the selectors will be whether international Twenty20 success leads to inclusion in the 50-over team ahead of next year’s ODI World Cup in India.

Should that eventuate, a central contract will be harder to avoid.