Western Australia has endured a mixed bag of luck during a snail-paced but intriguing second morning of their Sheffield Shield clash with NSW at the WACA Ground. 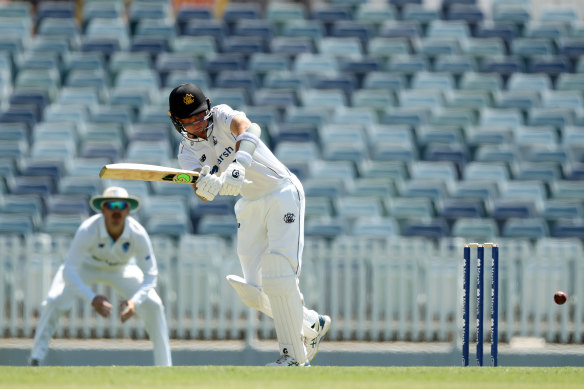 Teague Wyllie of the Warriors batsduring the Sheffield Shield match between WA and NSW at the WACA grounds on Tuesday.Credit:Will Russell/Getty Images

The Warriors started the day at 2-18 and Hilton Cartwright (16 off 56 balls) seemed a tad unlucky to be given out LBW to Jack Edwards (1-5).

Although the ball struck Cartwright on the back leg, it looked as though it was going to sail over the stumps.

But WA received a couple of lucky breaks just before lunch.

And next over Fanning was lucky to be given not out after being struck on the pads by spinner Nathan Lyon.

Fanning’s strike rate of 19.55 at the break didn’t make for pretty reading.

But his grit on a tricky wicket has proven crucial in helping set WA a platform to take a first-innings lead.

NSW’s meagre first innings total of 180 would have been far less had it not been for captain Kurtis Patterson, who defied a five-wicket haul from speedster Lance Morris to finish unbeaten on 72.