Australia’s players mentally prepared for the distinct possibility of finishing the Twenty20 World Cup without a hamstrung Aaron Finch in the closing overs of the win over Ireland at the Gabba, as the captain sweats on the outcome of scans on Tuesday.

Matthew Wade, locked as Finch’s deputy and backup as T20 captain for the past two years despite no longer having a Cricket Australia contract, marshalled the Australian bowling and fielding effort to close out a 42-run victory. 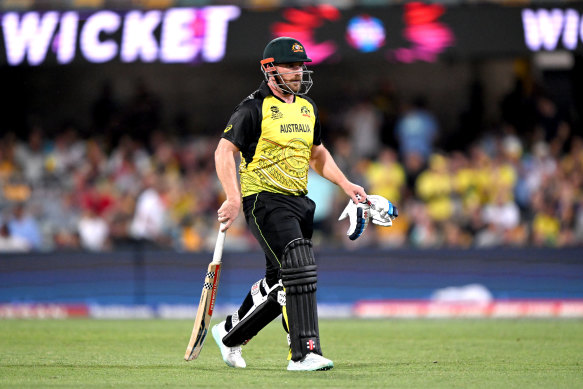 Aaron Finch walks off after making 63 but tweaking his hamstring against Ireland.Credit:Getty

Between innings, after it was clear that Finch had tweaked his hamstring during an innings of 63 off 44 balls, he engaged in a conference on the field with Wade, head coach Andrew McDonald and substitute fielder and former T20 captain Steve Smith to discuss plans.

Wade has already experienced quite an eventful few weeks. He was embroiled in an obstructing the field incident during the T20 series against England before the World Cup, then came down with COVID-19 but still put his hand up to play in what turned out to be a washed out game against England at the MCG on Friday.

While final confirmation of Finch’s hamstring status may not arrive until late on Tuesday after the team has flown down to Adelaide ahead of their final group game against Afghanistan on Friday, Mitchell Starc said it had been useful to see Wade directing traffic.

“It was obviously different – better to experience it now than in the finals,” he said. “It was still a little bit frantic while they were striking the ball quite nicely.

“It probably changed a bit, having Aaron off the field was probably what he was planning to do, and I wasn’t part of the messages or conversations coming off. But we came away with a nice win. We’ll regroup and see where we’re placed when we get to Adelaide.”

Josh Hazlewood, who shared the new ball with Pat Cummins, pointed out that as a seasoned team, there were plenty of leaders available.

“I think we covered it pretty well out there, we’ve got an experienced team, a lot of experienced,” he said. “It was an interesting game, one guy hitting it well from one end, and batting with the tail.

“Those situations are always a little bit difficult to get the field right and the ball sequencing right, it’s a bit of a different situation. A good challenge in the end.

“The way our bowling is set up, the bowlers take a lot of the initiative. They know what ball they’re bowling, they know what field they want, and in particular the four bowlers I think, the four main bowlers, they take the onus on themselves and with Finchy it’s a conversation a lot of the time, it’s not really a directive.”

The verdict on Finch’s hamstring – alongside parallel complaints for Tim David and Marcus Stoinis – will arrive about the same time the Australians are landing in Adelaide to find out how New Zealand are faring against England at the Gabba.

A win for the Black Caps will mean that Australia will merely have to beat Afghanistan on Friday to progress to the semi-finals; an England victory would mean it may all come down to net run rate and their final game against Sri Lanka.

“For us, it’s about trying to win these games first and foremost, because if you don’t win it doesn’t matter, does it,” Starc said. “A tick of the box today, we brought that run rate back a bit, and we’ll see how we’re placed in 24 hours.”