Following the Royal Ascot triumph with Nature Strip, the only milestone left for Chris Waller, the Kiwi who arrived in Australia without a feather to fly, is the world’s richest two-year-old event.

Ironically, his youngsters are booming at present with two Warwick Farm winners on Wednesday, Waverider Buoy and Ammahell, followed by the hot favourite in today’s Furphy Handicap, Alberich.

Waller is now highly regarded on the world stage after his win with Nature Strip at Royal Ascot.Credit:Getty Images

However, Waller has still to open his innings in the Golden Slipper, a situation similar to what he faced before the
last Melbourne Cup where he qualified as a “two mile trainer” with the outstanding Verry Elleegant.

The incredible rise and rise of Waller again came to light when the old-timer Ken Callander made a guest
appearance at Royal Randwick last Saturday for a ceremony for the late Caryl Williamson, a New Zealander
like Waller and major achiever, who was replanted on sacred turf at headquarters.

Williamson, toiling for Australian Associated Press, became the first female turf editor, and her ashes were spread in a perfect setting from which a grapevine of the pinot grigio variety immediately sprouted.

But her presence is still experienced with her picture beaming down from an appropriate height in the new
media centre where she applies her speciality, the bulls–t metre, to those stretching the truth below.

Rusted into the past, Callander and I ruminated on just how far Waller had come. How could we believe
anybody would achieve and dominate a Sydney premiership superior to Tommy Smith?

Both started from ground level. Waller was so financially strapped he had to borrow the $10,000 required to get a trainer’s licence.

With the Royal Ascot scalp with Nature Strip, who had four previous trainers, so he was no gift, Waller is now highly regarded on the world stage. Sure, Smith created records against great rivals, including Bart Cummings, Neville Begg, Jack Denham, and Jack Green.

Pride has not shone with two-year-olds either, not a concern, nor is his stable littered with yearling sale
toppers. But he produces super-fit types, consistent and improving very much in the Smith mould. 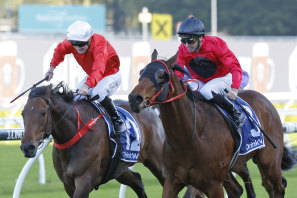 Taksu on the outside gets the better of Jojo Was A Man in the Winter Stakes.Credit:Getty

Since taking over Taksu from Ciaron Maher – Taksu has had 13 starts for Pride for five wins and four placings. Perhaps on Saturday Pride’s best chances are at Eagle Farm with Invinciano (Dry) and King Kapa (Mekka), who is
carrying blinkers for the first time.

Since moving to Warwick Farm in 2011, Baker, the younger, is edging towards 1000 winners and should also play a major role on Saturday with Shades Of Rose (Fab Industrial).

Like Pride, his team usually holds form but after winning her first three starts the filly buck jumped out of the gates due to a slipped saddle when $3.10 favourite last time out.

Subsequently, the saddle remained intact when Shades Of Rose barrier trialled impressively. Rachel King is in the
hot seat today, following their Grafton Cup triumph with Arapaho on Thursday. Baker also accepted with Quiet Riot in what is a Waller-free race.

Still, the leading trainer looks likely to dominate at Rosehill. Alas, the only race beyond 1500 metres being to
Moraitis (1800m) in which Waller has three acceptors, Francesco Guardi, Mubariz and Lord Ardmore.

Williamson had a soft spot for Waller stayers, especially Who Shot Thebarman, the Waller veteran who scored in the Sydney Cup (2018) and contributed to her winning the Sydney carnival tipping contest.

She always fancied an aged New Zealand gelding. No doubt the bulls–t metre on the Randwick media centre wall
will be now reacting.