Much as he has done with the patience of opposing bowlers over the past decade, David Warner is testing the flexibility of Australian cricket’s contract system.

When Cricket Australia’s chief executive Nick Hockley returns from the Commonwealth Games in Birmingham, all indications are that Warner fully intends to request a no objection certificate (NOC) to play in the UAE’s new Twenty20 league in January. 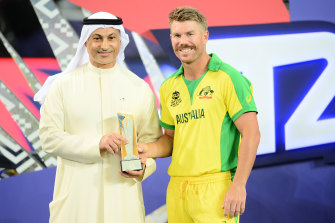 David Warner was player of the tournament when Australia won the World Cup in the UAE last year. Credit:Getty

It is almost certain this request will be refused.

Technically, Warner’s terms with CA do not allow him or any other player to take part in an overseas league – other than the Indian Premier League – any earlier than April. Exceptions have been made for the Pakistan Super League, but only after the end of the BBL.

An NOC will only allow a player to go overseas for a pre-agreed number of days, and have to be reapplied for every year, regardless of how long the player in question has a contract with the overseas league.

It’s something that Chris Lynn, recently jettisoned by the Brisbane Heat and unable to reach terms with other Big Bash League clubs at his steep asking price, will also have to request to play in the UAE or the new South African Twenty20 league, even though he does not hold a CA or state contract.

That’s because under the terms of contracts signed off by CA and the Australian Cricketers Association, a player needs to have been retired from such deals for two seasons before being beyond the jurisdiction of the governing body to give approval. This clause is not viewed fondly by current players.

Lynn and Warner are linked in so much as they are seeking what they see as the market rate for their services in Twenty20 leagues: Lynn’s former deal with the Heat was worth around $200,000 a season.

It’s GMR Group’s recent purchase of one of the UAE league franchises that is likely to have helped hasten Warner’s inquiries about making himself available in January. IPL and Indian club ownership is expanding at a rapid rate.

Not only will all the UAE teams have extremely well-heeled Indian ownership, every club in the new South African league has been purchased by the owners of an IPL team.

Senior cricket sources told The Age and The Sydney Morning Herald that Warner had discussed multiple offers from the UAE league with senior Australian figures on the recent tour of Sri Lanka.

At the same time these talks were going on, Warner’s Test opening partner and longtime friend Usman Khawaja was speaking openly about the need for private investment in the BBL, principally to ensure it could offer globally competitive cash for the best players. Khawaja made it clear he did not just mean overseas players.

This imbalance is, at least partly, a problem that flows out of the 2017 pay deal signed by the ACA after an extended dispute with CA. 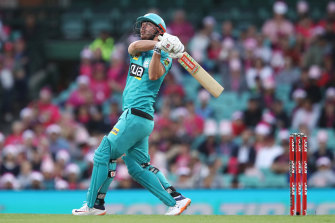 While the deal enshrined a fixed percentage of revenue for all players, it somehow did not extend to that being fully reflected in the expansion of the BBL salary cap once the 2018 broadcast deal was signed for $1.18 billion over six years.

In the last summer of the former deal with Ten, worth about $20 million a season, the BBL retainer cap was $1.6 million per club, meaning CA was spending the equivalent of more than 50 per cent of rights revenue on player salaries into what was at the time a 10-game season per team.

But after four years of 14-game seasons, the current cap is still less than $2 million per club – adding up to less than 20 per cent of about $80 million in broadcast rights fees per year – with extra money dished out this year for overseas players. The top “platinum” draft picks will earn $340,000 each. That’s closer to a competitive global rate, but out of the reach of Warner, Pat Cummins and company as local players.

The fact that overseas players may be able to earn that much for playing in half the BBL season this summer, while Australian cricketers are left out of the extra windfall, has caused widespread consternation. The likes of Glenn Maxwell, Marcus Stoinis and Matthew Wade, BBL stalwarts all, have never been able to attract much more than $150,000 a season.

As IPL clubs and Indian corporate titans hoover up Twenty20 franchises all over the world, high-paying overseas tournaments now expand well beyond the neat April-May window that CA helped the BCCI engineer when the league was born in 2008.

That puts a third player, alongside Warner and Lynn, in a fascinating position. The powerful Tim David proved his capabilities beyond all remaining doubt in the IPL this year, and without a CA contract, he has more freedom to play overseas outside the BBL window.

In 2017, Warner had pushed CA by publicly stating “they might not have an Ashes” amid a bitter pay dispute that resulted in a rushed agreement signed within weeks of an overseas tour to Bangladesh.

This time, Warner is pushing at the edges of what the current system will allow. Both CA and the ACA will need to confront the issues of contract flexibility and Twenty20 market value for players in their next pay deal, before Warner’s enquiries turn into something more widespread.