“When we signed up for the IPL, we all knew there was a global pandemic running. We knew India was likely to get a second wave like everywhere else. Just because it’s happened and it’s on such a massive scale, this doesn’t change the commitment we made to people in India. I’m happy to stay.”

These are the words of a member of the Indian Premier League caravan, continuing this week while more than 300,000 people in the country are testing positive and nearly 3000 are dying from COVID-19 each day. Like many watching from afar, I am appalled by the juxtaposition of cricket with images of funeral pyres; patients suffering, unable to obtain medical services, and dying in hospitals, homes and on the streets. The unrecorded toll is higher. To me it seems indecent that something as frivolous as sport could continue; that it does only feeds my existing conceptions about the IPL’s greed and Indian cricket’s addiction to commerce. 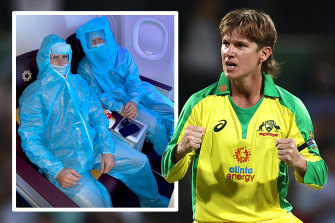 Adam Zampa has arrived in Australia after leaving the IPL. (Inset) Kane Williamson and David Warner, IPL teammates, suit up for an internal flight in India.Credit:

Adam Zampa and Kane Richardson, who left the Royal Challengers Bangalore team this week, have played one game between them in the tournament. Andrew Tye, who left earlier, played no games for the Rajasthan Royals. While this makes it understandable that those players would want to leave, it doesn’t necessarily put them on a higher moral plane or make them more responsible than the likes of Pat Cummins, Glenn Maxwell, Marcus Stoinis, David Warner or Steve Smith, Australians who are playing every few days as essential members of their teams.

But how does it feel to be playing cricket amid a health catastrophe?

“We are not playing in front of crowds or staging events that put the population at risk,” the IPL participant tells me. We note that when Sydney was undergoing an outbreak of the virus, this was exactly what it did, putting on a Test match in front of 10,000 spectators a day. We got lucky. The IPL is not taking that kind of gamble.

Aren’t the participants affected by the terrible scenes around them? 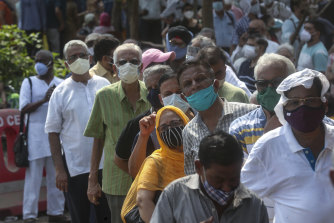 People queue in Mumbai, India, on Monday to receive their COVID-19 vaccine.Credit:AP

“Of course,” he says. “But once you’ve been in India for a while you understand that the scale of everything is bigger here. This is one-fifth of the world’s population. There are 150,000 deaths a year in motor accidents here. That’s 400 people a day dying, and thousands more being injured on the roads. Nobody is saying we should stop cricket for that. When America had a higher death rate than India, they got their sporting competitions going and that was seen as a positive thing. The world might be shocked by what’s happening in India, but people in the country see it their own way, and they have to find some way of getting on with their lives.”

It’s not that my opinion is being changed by what I am hearing; more that it is being shrunken to its proper size. When I have been in India, the experience is of an almost cellular humbling. Everything in you is reduced, most importantly your ego. From Australia, my emotions are repulsed by the spectacle of the IPL, but I am not Indian, I am not in India, I have no family there, I am on an island mostly protected from the virus. I am one of the last people in the world whose opinion should carry weight.

Where my friend does have a critical view, it’s of Chris Lynn’s request that Cricket Australia provide a charter flight home for the Australians in India. “I don’t know if he was joking about that,” he says. “But we are not here representing our countries, we are here for private enterprise, and if our countries are to get people home, there are thousands of others ahead of us in the queue.”

Lynn pointed out that CA makes a commission on its players’ IPL contracts, which raises a touchy point. To what extent are these players “Australian cricketers”, as opposed to “Australians playing cricket for Indian enterprises”? Lynn is not on a CA contract, yet he said CA takes 10 per cent of his IPL income. Does this entail responsibility? It would certainly be a bad look for cricketers to get a safe ride home, but is it any better for their care to have them sitting in long-term quarantine in unknown destinations without any idea when they might get out?

This goes to a long-brewing fault line in Australian cricket at the top level, when players on national contracts are allowed to moonlight as privateers for two months of the year. CA lets them do so, to give the players freedom to maximise their income and gain what might be valuable experience, and to accommodate the Indian cricket board. Does it then wash its hands of the players during a crisis? Again, there is no simple answer once you think about it. Australia might feel it “owns” its top cricketers, but it doesn’t, not for these two months anyway. Yet wouldn’t it also be heartless to tell them they have made their gilded beds, so now they have to lie in them?

This points back to the complex, ever-evolving relationship between populations and their sporting spectacles. India, my friend reminds me, has a connection with cricket unlike anywhere else. Australia had this connection with cricket during the Great Depression, when the exploits of Don Bradman and others really did unify a nation with an almost religious eagerness to draw hope from symbolic acts. Australia’s attention has long fragmented away from cricket, but India’s has not.

“I really do believe we can achieve positive things for Indian people,” my friend says. “It’s started with Pat Cummins making a public donation, and other players and commentators have followed suit and are working to do more for the common good. People are locked down in their homes all day, waiting for the cricket to come on. We’ve got to believe that we are bringing something positive into their lives. I think there is a real spirit among the people in this tournament that this is a time when we can give back.”

Again, it’s not that I couldn’t contest some of his arguments but my opinion doesn’t, and shouldn’t, matter. There is another side to every story, and things can look very different from different parts of the world.

Tags: back, can, Co, Easy, give, to, We
You may also like
Latest Posts