Australian captain Meg Lanning says it is not panic stations for her side after a shock opening loss to India that has left little room for error if the tournament favourites are to take out the T20 World Cup.

Australia have precious little time to dust themselves off and regroup after their nightmare start to the World Cup, during which the world No.1 side lost 9-60 to be all out for just 115, 17 runs short of their target of 133 at the Sydney Showground on Friday evening. 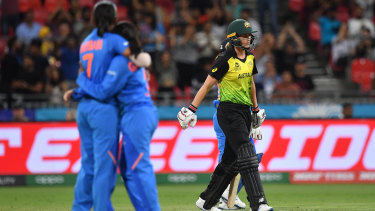 “Chamari loves facing our attack, she has hit us to all parts of the ground the last couple of years and she’s in good form,” said opener Alyssa Healy said. "We aren't taking any team lightly. It's a really tough pool and we love that. We'll prepare the best we can, we'll get our plans in place and if we do that, we'll be OK.”

Perhaps the most surprising comment in the aftermath of the loss was Healy saying Australia knew a defeat wasn’t going to be a bad thing in the pool stages.

Lanning said that while a victory was clearly the desired outcome, her previous World Cup experiences have taught her a perfect tournament is hard to come by.

“I’ve never gone through a World Cup and not lost a group stage game, so we’ve got that one out of the way early,” Lanning said. “We probably started that a little bit earlier than we would have liked, but there is pressure on at World Cups all the time and these games coming up are no different.”

Team balance will also be a point of discussion in coming days and particularly of what to do with Annabel Sutherland.

The young all-rounder was a slightly left-field selection for the tournament opener, but did not bowl an over and came in at No.8 before being stumped for two runs off five balls.

Meanwhile, Australia are hopeful spinner Sophie Molinuex, who missed the India match due to a corked leg, will be eligible for selection against Sri Lanka.

Tags: after, early, panic, We, won't, Wor
You may also like
Latest Posts