Remember all those months when you couldn’t leave home. Now imagine a similar period when you couldn’t go home. That’s how it is for the bulk of Australia’s cricketers. And it stands to become an out-of-sight out-of-mind issue.

It’s not politically correct to sympathise with professional sportspeople who get lavishly paid to live their dreams while other people do their cooking and washing. But confinement in luxury is still confinement. An ivory tower is sometimes a lonely place. House arrest in a nice house is still arrest. 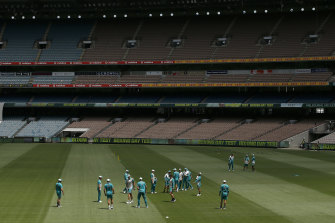 Australian players train at the MCG. The bubble has been looser for the team in Melbourne, but will tighten in Sydney and Brisbane.Credit:Getty Images

You can say that Australia does not have to play so much cricket, but it is a bankable opponent for countries like New Zealand and South Africa, and Australian cricket is conscious of its obligation to be a good cricket citizen.

At heart, it is about heads. Ask almost any administrator a year ago what was the No.1 issue in sport and most likely you would have heard that it was player welfare. In cricket, this is undeniable. It is a game that messes with minds anyway, and carries an ever-present danger to skulls. Will Pucovski has copped both barrels.

Now there is only one item at the top of every agenda. But as cricket makes its accommodation with the pandemic, it will have to accept that it can’t always and for everyone be five-star accommodation behind a cordon sanitaire. It needs to have other resorts. It might mean leading players stand out of not just the occasional match, but series. It will mean sophisticated mental health planning. It will mean understanding.

What most of us missed in 2020 was normality and family. So, believe it or not, do cricketers.

Tags: becomes, prison, protection, When
You may also like
Latest Posts