It’s almost do or die for Australia, and now or never for Steve Smith’s T20 World Cup campaign.

As on-field leaders Aaron Finch and Pat Cummins face calls to be axed, hopes are fading Smith, one of the best players of his generation, will be recalled for what is shaping as Australia’s pivotal group game against England on Friday night.

Back in control of its fate after England’s shock loss to Ireland, the host nation will go a long way to booking a berth in the semis with victory but a second loss would see Finch’s men on the verge of an early exit.

Seldom in this event will there be a stronger argument for Smith’s reinstatement. The pressure-cooker environment of a high-stakes game against the Old Enemy demands a big occasion player like Smith, who adds starch to a top seven in tricky La Nina batting conditions. 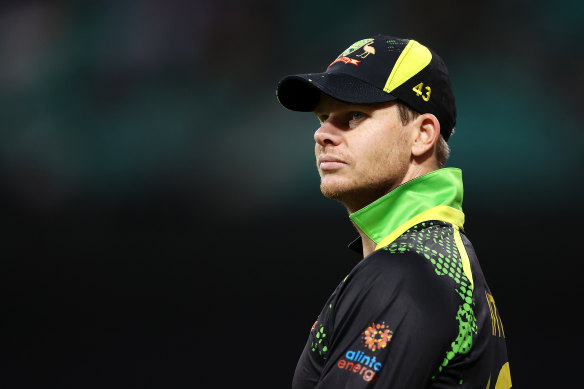 Steve Smith has not played a game in this year’s T20 World Cup.Credit:Getty Images

Though Smith, a member of Australia’s success last year, lacks the hitting power of T20 freelancer Tim David, this is not as big a factor at the MCG with its longer boundaries and the need for athleticism to hurry twos.

Should he miss out, it would be difficult to see him brought back for closing games against Ireland and Afghanistan.

Finch said the case for a steady head in the batting line-up would be considered but given Australia’s desire for power in the middle order there is no room for Smith – unless the captain was dropped, a move called for by former skipper Allan Border but dismissed as a possibility by the incumbent leader despite his recent struggles.

There are times when a knock like Finch’s against Sri Lanka, where he struggled to find the middle of the bat in his 31 off 42 balls, provide a truer gauge of form than a single-digit score, but he played down its significance.

“It’s an anomaly in my career,” Finch said. “It was just one of those days.”

Finch said he would adopt a more positive mindset during the middle overs.

“Once Maxy started to get away I probably went into my shell a little bit and looked to just get off strike rather than still hitting good strong shots out to a field, out to a deep man,” Finch said.

“I was trying to get off strike in the ring, which is never easy when you’re facing a world-class spinner like [Maheesh] Theekshana.”

The Australians are reluctant to over-attack against the new ball for fear of losing a slew of wickets in the powerplay and asking too much of their power hitters to rescue the innings then launching late.

He said that strategy had laid the platform for Glenn Maxwell and Marcus Stoinis to hit out almost from the word go.

“Any time you have to rebuild that takes a bit of momentum and time,” Finch said. “There’s two ways. You can either do it that way or come out guns blazing and risk going the other way. It just hasn’t been a tournament so far where you look and say batting is dominating ball.” 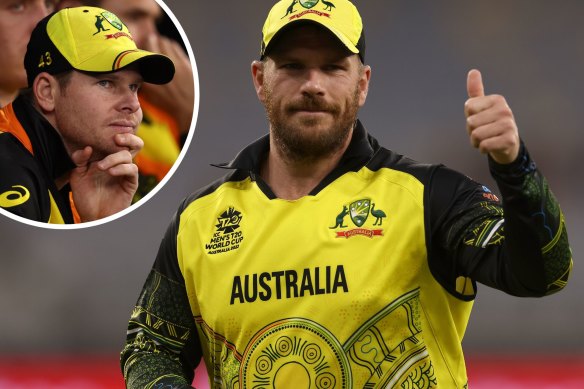 Though Finch said he was not fazed by Border’s criticism, he defended Cummins against calls from former selector Mark Waugh for the pace ace to be dumped.

The Test captain’s economy rate of 8.78 run per over this year is the worst of his international career, and he also struggled in the Indian Premier League with seven wickets at 30 and 10.68 runs per over. Finch said Cummins remained a weapon in the shortest format.

“Absolutely he is,” Finch said. “His numbers over the last 18 months have been outstanding in T20 cricket.

“It blows my mind sometimes where people go with selection chat. He’s been unbelievable in all three formats for a long time. The calmness he brings to our bowling group, the experience, it’s invaluable.”