Tim David took a back road to circumvent the Australian system and earn a World Cup berth – and it’s not a path he would recommend to just anyone.

Why? Apart from anything else it can be lonely. After losing his Western Australia rookie contract in 2019, David was left virtually to his own devices, figuring out how to reshape his game in order to reach the cricketing heights his talent demanded. 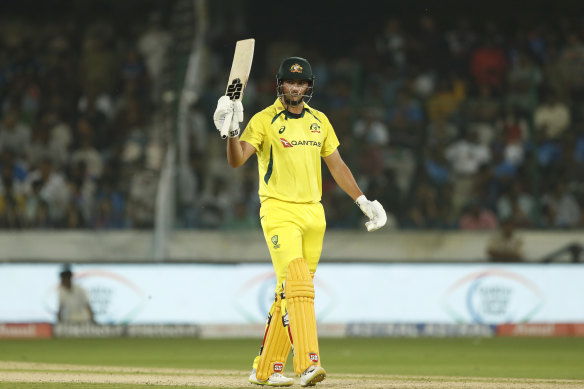 Tim David made 50 against India during his third match for Australia last month.Credit:Getty

The sharp focus on a demanding Twenty20 middle order role, in which enormous power and specific scenario training were required, was almost a product of necessity as he spent two winters without a contract in Australian cricket. At the time, David’s mindset had to be something like that of a golfer or tennis player, rather than a team member.

“It’s a tough one because you’re by yourself,” David said ahead of Australia’s Twenty20 matches against the West Indies on the Gold Coast this week. “There’s not a lot of support for a lot of the time.

“When I was younger and I got released from the state system, I probably had to find a different way, and that was just fortunate again to have opportunities and try to make the most of those. To end up at home for a World Cup is really exciting.

“[But] I’d encourage anyone to go out and play whatever cricket they can, whether to play in different countries or play locally. It’s a great opportunity to experience different cultures and build on those experiences.”

Speaking in the week of his first matches for Australia on home soil, David was asked about how valuable it was to learn from more seasoned players in the squad. He made it clear, with some caveats, that he had been chosen to do the same things that got him here.

“It’s just about coming in and doing what you do best, but also having a look at how the other guys approach it and just see what works for you,” David said.

“It’s a really similar role. That’s why I’ve been added to the squad, added to the group – what I’ve been doing is what I’m going to be trying to do for the Australian team if I get the chance. So business as usual really.”

Much as his debut series against India was aided by IPL experience against much of the home side, so too will David’s recent sojourn in the Caribbean Premier League be helpful, against a West Indian squad that no longer features the likes of Andre Russell and Chris Gayle.

“I’m really fortunate I’ve played in a lot of leagues now, so I’ve been exposed to guys we’re playing against, and you just get into your work,” David said. “Just being around a lot of the guys you’re playing against or playing with, so it doesn’t feel like a massive step up.”

Meanwhile, Marcus Stoinis has been granted more time to recover from a side strain and did not join the Australian squad on the Gold Coast. Instead he will wait in Perth until Aaron Finch’s squad flies in on Saturday ahead of three games against England. Cameron Green will come into the 15-man squad for the World Cup should Stoinis not recover in time.