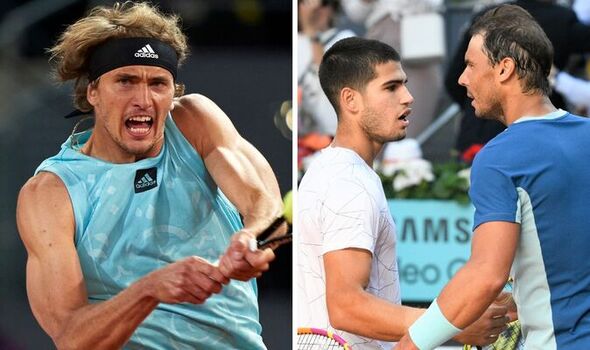 Alexander Zverev has played down his chances of defeating Carlos Alcaraz in the Madrid Open final as the defending champion claimed the 19-year-old would take over ownership of the court in Madrid after Rafael Nadal’s dominance at the tournament. Nadal has won the event five times while Alcaraz will be bidding for his first title at the clay-court Masters 1000.

Zverev will take on Alcaraz for a third time in their careers, holding a 2-0 winning record over the teenager, but he has downplayed his chance of outlasting the seventh seed this time around following Alcaraz’s back-to-back wins over Djokovic and Nadal in the last two rounds. Alcaraz’s victories saw him become the first man in history to beat them in succession on the clay – and Zverev admitted he “wasn’t surprised” at the seventh seed’s huge victories.

The German himself is a big fan of the conditions in Madrid, having won the tournament twice including last year, but admitted he was no match for five-time champion Nadal or the man he thought would become his heir to success on the Manolo Santana stadium. “I have been playing well, so I’m just renting it,” he laughed after defeating Stefanos Tsitsipas in the semi-final.

JUST IN: Madrid finalist is richer than Federer, Nadal and Djokovic combined

While the reigning champion continued to speak about Alcaraz as though he was the favourite, Zverev was also happy with his performances in his last two rounds against Tsitsipas and Felix Auger-Aliassime after playing what he thought was his “worst match in six years” as his most recent tournament in Munich.  “I thought from yesterday [Friday] onwards I started to play really well,” he claimed.

Zverev also said he predicted Alcaraz’s ascent into the world top 10 during the 2021 Mexico Open, but admitted the four-time title winner had exceeded his expectations and done it a whole year early. The 25-year-old’s prediction came after he defeated a then-17-year-old, world No 132 Alcaraz 6-3 6-1 en route to the title in Acapulco last year.