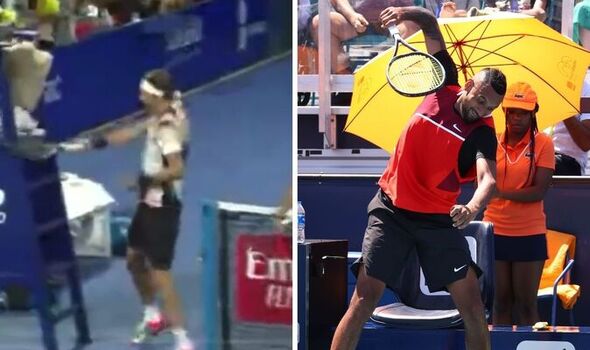 Justine Henin has slammed Alexander Zverev, Nick Kyrgios and Daniil Medvedev for their recent on court outbursts in the wake of an ATP crackdown on unsportsmanlike behaviour. Zverev was withdrawn from the Mexico Open in February when he smashed an umpire’s chair with his racket and the seven-time Major champion believes the world No 3 should have been banned from competition following the incident.

The ATP recently warned players that umpires would become more strict in applying the Code of Conduct following “an unusual frequency of high-profile incidents involving unsportsmanlike conduct” in the first three months of the season. It came after outbursts from Medvedev at the Australian Open, Zverev in Acapulco and Kyrgios in Indian Wells and Miami.

Former world No 1 Henin has now hit out at the players to condemn their “unacceptable misbehaviour” and said there needed to be better punishments to prevent incidents becoming worse in future. “We have to take action. We hope concrete action will be taken so that these extremes stop,” she told Eurosport Tennis Club.

Referencing Medvedev screaming at the umpire during his Aussie Open semi-final against Stefanos Tsitsipas, Kyrgios narrowly avoiding a ballboy when he threw his racket in Indian Wells and Zverev smashing the umpire’s chair in Acapulco, she continued: “You can’t yell at an umpire. Even if there is no intention, it is a problem to break a racket that flies as far as a ball boy.

“You can be tired… but we can’t see the images of Alexander Zverev again. These are behaviours of intimidation, of rage, which we cannot see and which we must punish much more severely.” And the Belgian tennis legend doubled-down on her criticism of the Olympic champion, adding: “He should not be on the court today, Alexander Zverev.”

Henin was happy to embrace the unorthodox styles of the likes of Kyrgios and Medvedev but didn’t want their behaviour to cross a line, something she believed was already happening. “The misbehaviour is becoming unacceptable. I think we can rejoice in Kyrgios’ tennis, in the moments when he plays wonderfully well – I admire that too – but there are extremes that we cannot accept. Zverev… even Medvedev at the Australian Open. Because where are we going to set the limit?” she added.

And the 2004 Olympic champion also took aim at Jenson Brooksby, who threw a racket in frustration in Miami which did hit a ballboy at the back of the court. “Brooksby didn’t even go to apologise to the ball boy. Kyrgios smashed his racquet and almost hit a ball boy – under the excuse that it did not hit the ball boy, they did not sanction him,” she exclaimed.

“I think it’s time to stop racket smashes because these are images that we don’t want to see on television. Top athletes must remain as role models, even if they are human. “What bothers me is when we return to the question: ‘Do we have sanitised tennis?’ I’d rather players are highlighted for their style of play… but if to make tennis attractive, you have to become vulgar and violent – because we are seeing more reactions like this – you reach my limit. I’m not interested in that.”