Dubai: World No.1 Novak Djokovic has extended his unbeaten start to the season with a 6-1 6-2 victory over Malek Jaziri in the opening round of the Dubai Tennis Championships.

Djokovic, who helped Serbia to victory in the ATP Cup before lifting his eighth Australian Open title last month, struck 22 winners and did not face a break point against wildcard Jaziri in a near-faultless display. 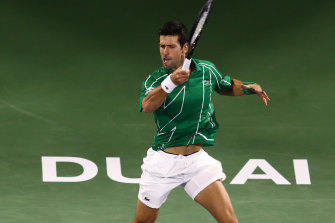 Novak Djokovic of Serbia plays a forehand against Malek Jaziri of Tunisia in Dubai.Credit:Getty Images

"It's a great way to start out the tournament," Djokovic, who is playing in Dubai for the first time since 2016, said.

"I miss playing here. I really enjoy it. I enjoy night sessions… I think I've done everything as well as I imagined it to be for the first match.

"Of course, there's things that always can be improved, things that can be better. But I have to be satisfied with the performance."

Djokovic is chasing his fifth title in Dubai and his first since 2013.

"I lost to him (Kohlschreiber) in straight sets in Indian Wells last year. I am aware of what he's capable of," said Djokovic.

"He likes actually playing top players on a big stage. He has lots of experience. I certainly will not underestimate him."

Seventh seed Karen Khachanov recovered from a break down on two occasions in the opening set before cruising to a 7-6 (7-2) 6-1 victory over Kazakh Mikhail Kukushkin.

The 23-year-old Russian dropped just one point on his first serve in the second set to improve his win-loss record to 8-5 this season.

Tags: 'Always, be, Bet, can, that, things
You may also like
Latest Posts

Cantlay rallies past Rahm, Thomas for Zozo title
Recent Posts
This website uses cookies to improve your user experience and to provide you with advertisements that are relevant to your interests. By continuing to browse the site you are agreeing to our use of cookies.Ok