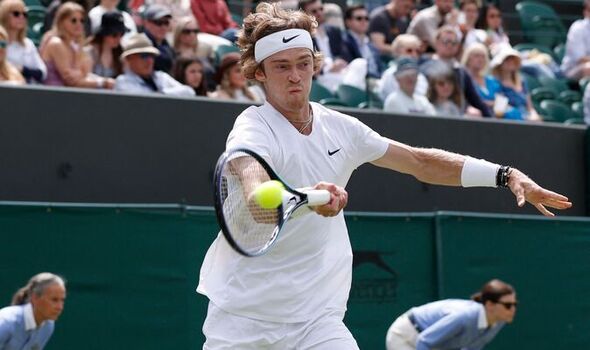 Andrey Rublev has admitted he isn’t hopeful that Wimbledon’s ban on Russian players will be overturned. It comes after the ATP and WTA held a meeting in Madrid to propose possible sanctions on the tournament as a result of the ban, including stripping the ranking points on offer.

Moscow-born Rublev was one of the first Russian tennis players to speak out on the invasion of Ukraine, writing “no war please” on the camera at the Dubai Championships in February. The world No 8 has since been vocal in his disagreement with Wimbledon’s decision to ban all Russian and Belarusian players from The Championships this summer.

The 24-year-old called it “discrimination” and previously revealed he and several other Russian players had a call with the tournament, in which he proposed they competed but had all their prize money donated to efforts in Ukraine, but he has now conceded that the ban is unlikely to be overturned.

“I don’t give myself hope. First of all I think if they announce already one decision, I don’t think that they will step back,” the 11-time title winner said after defeating Dan Evans in Madrid on Thursday. “If they will step back it will be really, really nice, and it would be a really nice move from them.”

Rublev also reiterated the plan he outlined in his phone call with the tournament as he added: “I made already a statement why it makes no sense and I think if we are playing, we can be much more useful to help than if we’re going to be banned. I think there are still calls between ATP and Wimbledon and some stuff like that, so we’ll see how the story ends.

“But how I understand that most likely – yeah I’m not giving too much hope.” During his run to the title in Belgrade recently, the Russian disclosed details from the call between his compatriots and Wimbledon as he said the reasons given for the controversial decision had “no logic” behind them.

“If there is a statement that we need to sign, on top of that, to give all the prize money to humanitarian help—to the families who are suffering, to the kids who [are] suffering, [we’ll do that]. And I think that move, at least, will do something—at least, that means and it will show that [the British] government is standing for peace, and they really want to do action to help,” he said after his opening win over Jiri Lehecka.

“And I think, if you calculate more or less the amount of money, it can be [depending on how well the players are doing] up to 1 million pounds. And this is a huge, huge [amount of] money that I think in two months not one [other] sport ever donated. So, tennis will be the first and only sport who will donate that amount of money and it will be [through] Wimbledon. So, they will take all the glory, all the respect from everyone—not from us [players], because no one cares about us.”