Australia’s ATP Cup hopes hang by a thread after James Duckworth dropped the first rubber in a critical tie against Russia to world No.167 Roman Safiullin.

Duckworth, who finished last season No.49 in the world, was marked favourite to give Australia a 1-0 lead before Alex de Minaur’s clash with US Open champion Daniil Medvedev, and looked to have the first set on his racquet after twice breaking Safiullin’s serve.

But at 2-5 down, the Russian turned the match into a baseline, groundstroke duel.

Whenever Duckworth tried to break his rhythm and approach the net, Safiullin would produce a brilliant pass.

Safiullin eventually claimed the first 7-6 (6), and had all the momentum in the second.

He dropped just one point (20 from 21) in the entire second set on serve. Duckworth, meanwhile, struggled to hold.

When Duckworth trailed 4-5, he faced his fourth and fifth break points of the set. 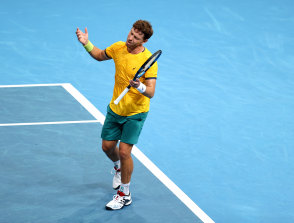 Australia’s James Duckworth blew a 5-2 lead in the opening set to lose in straight sets on Tuesday night.Credit:Getty

On the second of two match points, Safiullin pressed and clinched the rubber, giving Russia a critical 1-0 lead.

The world No.7 played like he had a point to prove against Ugo Humbert, the rising French star who upset Daniil Medvedev at Ken Rosewall Arena on Sunday.

Berrettini cruised through the 6-4 first set but Humbert’s level lifted with the match on the line in the second set.

He forced a tiebreaker but Berrettini held his nerve and prevailed, clinching the must-win tie for Italy after their shock defeat to Australia on Sunday.

Berrettini and Jannik Sinner then returned for the doubles to claim a critical sweep, with every match critical in the race to the top of the group should Russia, Italy and Australia both finish with two wins and one loss.

“We stepped on the court and we said that we would play like it was 1-all, because it was really important for us to win this match,” Berrettini said.

“Now, we have to wait obviously for the next result for the next tie. But it was really important to win this doubles.

“In our mind it was 1-0, but knowing that we both won the singles, we were feeling a lot of confidence.”

Alexander Zverev was the other top 10 star in action during the day session.

He continued his perfect start to the season with a comfortable 6-4, 6-4 win against American world No. 23 Taylor Fritz.

Zverev broke Fritz early in both sets and subsequently cruised through the match – until a tense final service game.

While some top 10 stars – such as Medvedev, Tsitsipas and Berrettini – have worked off some rust in Sydney this week, Zverev has not missed a beat.

The reason for his high level, according to the Olympic gold medallist, is that he’s working harder than any of his rivals.

“Look, it’s the second match of the season. I’m still getting into it. I’m still trying to adjust, but I’m happy with how things are,” Zverev said.

“I’ve played two very high-level players. Taylor, I lost to him in Indian Wells, so it was nice to get back out on court with him.

“Maybe the most out of anybody here.

“I’m happy with the wins. I’d much rather be with two wins under my belt than two losses. That’s for sure.”