World No.1 Ashleigh Barty will get the chance to go head-to-head against some of her top rivals when her return to the court coincides with the launch of the Australian summer in Adelaide next week.

Barty has been added to an elite group of players who will feature in the Day at the Drive exhibition event next Friday, January 29. 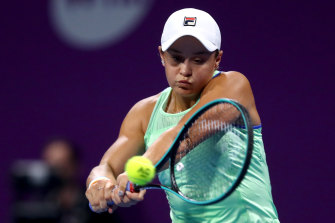 World No.1 Ash Barty will play an Australian Open lead-up event in Adelaide next week.Credit:Getty Images

After missing most of last season – she skipped events due to the coronavirus pandemic – Barty will appear alongside leading players Novak Djokovic and Rafael Nadal, as well as rivals for her top ranking Naomi Osaka and Simona Halep.

The field now boasts an impressive 67 grand slam singles titles between them.

"I am looking forward to playing my first match for the 2021 season in Adelaide," Barty said.

"I have fond memories from the Adelaide International last year and it will be great to get back on court here for A Day at the Drive."

Tags: added, Adelaide, Barty, field, to
You may also like
Latest Posts