New British No 1 Cam Norrie BEATS Nikoloz Basilashvili to claim shock Indian Wells title and take his earnings at the tournament to a huge £880,000 – and he’s now eyeing a spot with the big boys at season-ending ATP Finals

For British tennis another glorious tale of the unexpected as, topping up Emma Raducanu’s US Open title, came Cam Norrie claiming the BNP Paribas Open at Indian Wells.

The 26-year-old left-hander on Monday morning completed the most unlikely double when, close to the opposite coast, he defeated Nikoloz Basilashvili 3-6, 6-4, 6-1 to win his first Masters level title.

Defusing the enormous power of his 36th-ranked opponent, Norrie made a fine comeback and furthered his argument for being the most improved men’s player of the season. 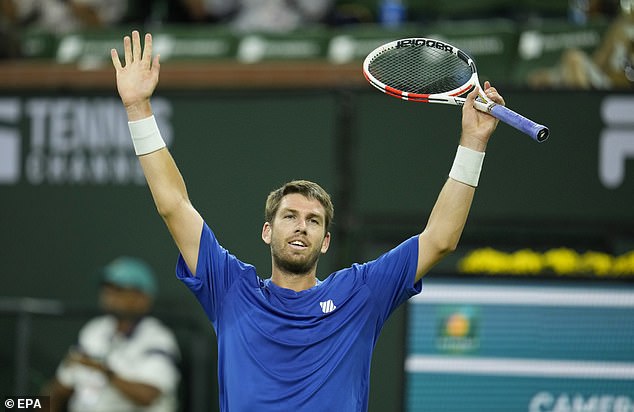 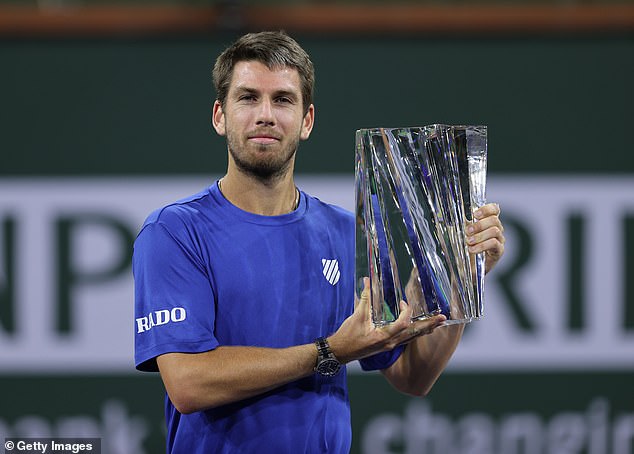 The Brit proudly holds the Indian Wells trophy, and he also scoops £880,000 in prize money 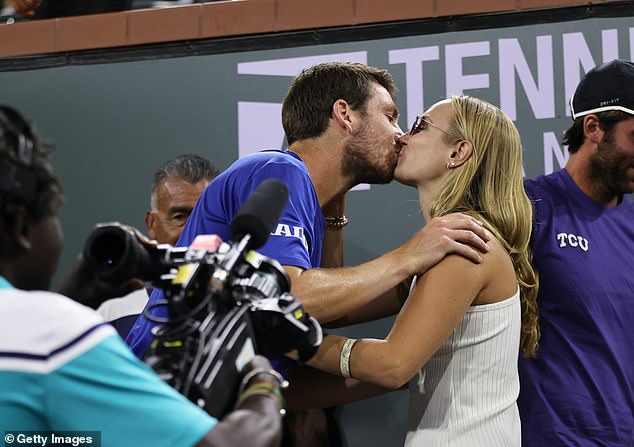 He began the year listed at 74 and on this season’s results is the No 10 in the world, very much in contention for a place in next month’s year-end ATP Finals in Turin for the top eight men.

His resourcefulness earned him £880,000 from this tournament and he went one better than Andy Murray, Tim Henman and Greg Rusedski, who made the final of this event.

He did it all while playing the match in an emergency new pair of tennis shoes: ‘I left my shoes on top of the locker. I think someone, maybe someone from the cleaners came through and they threw the three pairs that I had away’ he said. ‘They took a bit of getting used to.’

Referring to the incident earlier in the tournament with Andy Murray he added: ‘ I don’t know what the people have against the Brits with stealing shoes, but I didn’t manage to get them back. Luckily I didn’t have a wedding ring attached.’

Day had turned to night by the time he finished off the Georgian, who like other opponents here had been worn down by Norrie’s athletic baseline defences.

Like Raducanu he did not have beat a top ten player to win what was his biggest title from six finals in 2021, but he coped with everything that has been thrown at him in supremely calm fashion. The achievement should not be underestimated. 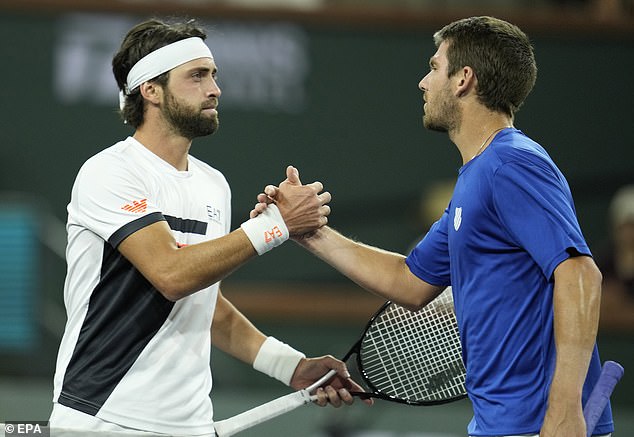 Basilashvili is ranked 36 in the world, but Norrie came from a set down to beat the Georgian 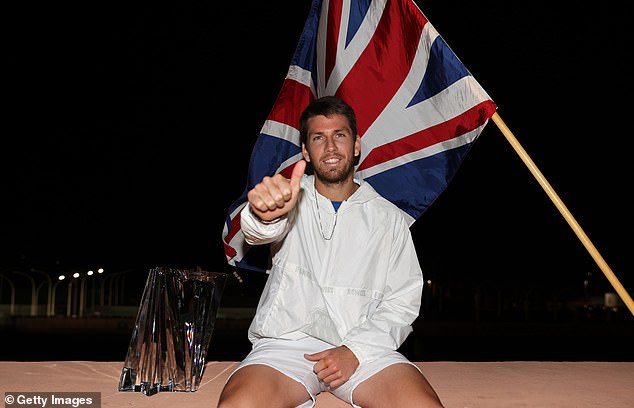 ‘It means so much to me, I’m so happy I can’t really describe it now,’ he said after a 109-minute win. ‘It’s amazing. If you had told me I would have won before the tournament started, I wouldn’t have believed you .

‘It was quite windy and at the early stage he hit so many winners it was hard for me to get confidence on my rally balls.

He now heads back to London and then to Europe to play indoors, trying to seal his place in the season-end finale.

The climax to this tournament again saw a reduced crowd, due to a variety of factors which include a one-off changed date and the smaller number of residents who have yet to arrive for their winter in the Californian desert. 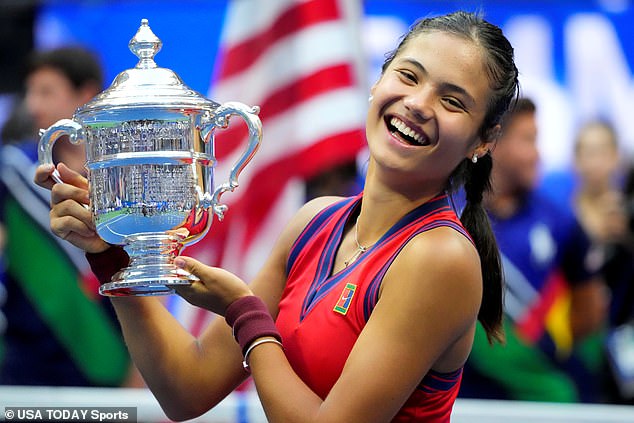 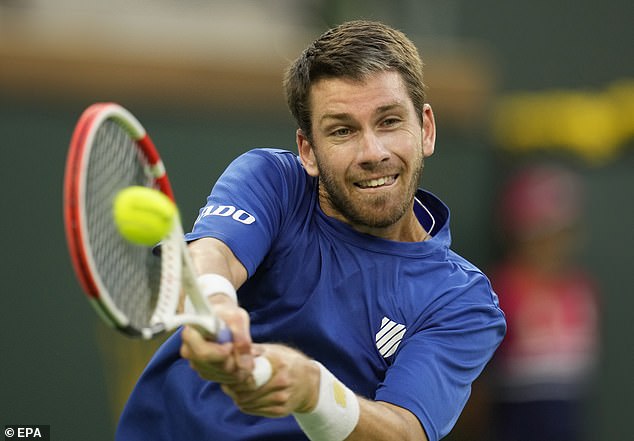 This match always had a feel of brain versus brawn with Norrie needing to resist the power of Basilashvili, one of the most potent groundstrokers on tour whose modus operandi is to hit the ball as hard as he can, especially on the forehand side.

The new British number one did just that in the early exchanges and broke to forge a 3-1 lead, starting off in similar fashion to his previous rounds.

The Georgian responded by quickly finding his range, and Norrie became visibly unnerved by the sheer pace coming at him, which began to be delivered with far greater accuracy.

Five straight games were lost and he looked in trouble when broken again in the third game of the second set.

However a facet here of the Putney-based southpaw has been his ability to reset and he began to play better as his opponent’s radar began to awry. Having broken back he was in the ascendancy at 5-4 when he broke to love. 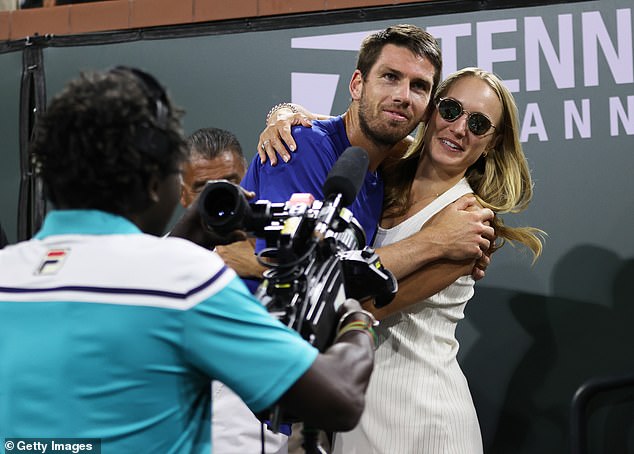 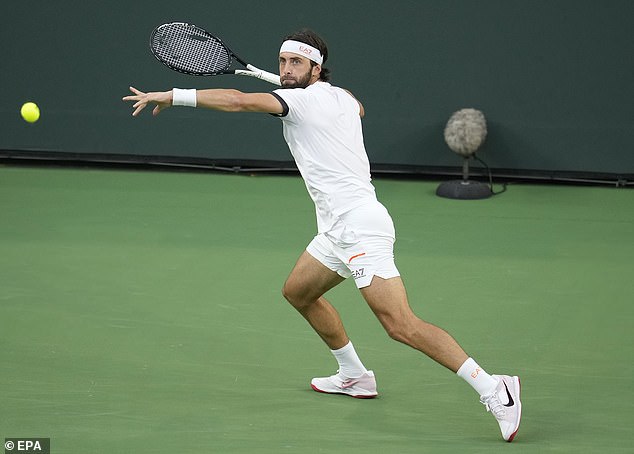 Big-hitting Basilashvili proved no match for Norrie, despite winning the opening set

The catalyst for that was a brace of outstanding points, a deft volley at the net followed by a superb running forehand pass.

He managed to keep the momentum going into the start of the third, breaking for 2-0 when Basilashvili fired a backhand wide. Norrie then survived a mini-crisis in the next game when he recovered to hold serve from 0-40, again drawing errors from the Georgian’s massive swipes at the ball.

Basilashvili took a desperate looking toilet break at 4-1 down but much good it did him. The three- minute hiatus failed to stem the stream of over-pressing mistakes that were now coming off his racket. He did not even make it difficult for Norrie to serve out, hitting long and wide.

Few players work harder or are more durable than the British number one, whose development largely took place in New Zealand. Nobody familiar with his work ethic or cheerful resilience through all the bubble restrictions this year could be anything other than delighted for him.