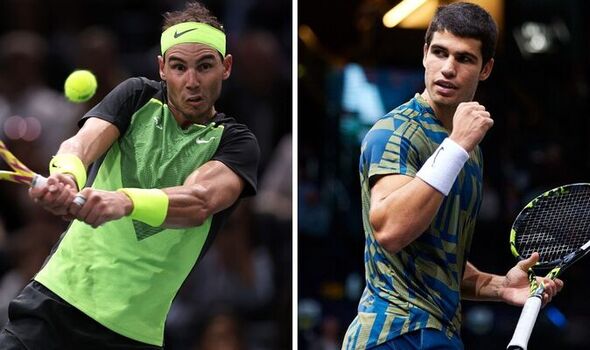 Carlos Alcaraz has become the most successful Spanish male tennis player behind Rafael Nadal as he overtook his own coach Juan Carlos Ferrero for most weeks at world No 1. The 19-year-old became the youngest top-ranked man in ATP history when he ascended to No 1 after winning the US Open.

Alcaraz has enjoyed a wildly successful breakout season, starting the year down at No 32 in the world before becoming the only teenager ever to reach No 1 in September. The Spaniard had just one title to his name when he started the year and went on to win two Masters 1000s, two ATP 500s and his maiden Grand Slam title at the US Open.

The 19-year-old has not been overtaken in the rankings since reaching the top spot and has now spent nine weeks at world No 1, putting him in second place for the most time at world No 1 for a Spanish man behind Nadal, who has clocked up a whopping 209 weeks. And Alcaraz overtook his own coach to become the second-most successful Spaniard.

Juan Carlos Ferrero spent a total of eight weeks as the world No 1 during his career, also reaching the top thanks to a US Open run. The 41-year-old became No 1 on September 8 2003, having won the French Open that year before reaching the final in Flushing Meadows.

Alcaraz is at risk of losing his No 1 ranking before the end of the season, however, as both Nadal and Tsitsipas can overtake him during the ATP Finals after the teenager was forced to end his season early after tearing his abdomen during his Paris Masters quarter-final against Holger Rune.

Nadal can secure his sixth year-end No 1 finish and become the oldest man ever to finish the season at the top if he reaches the final by going undefeated 3-0 in his round-robin matches or if he wins the title with a 2-1 or 1-2 record in the round-robin stage. Meanwhile, Tsitsipas must go undefeated and win the title to become world No 1 for the first time in his career.

The six-time title winner was set to make his debut at the ATP Finals a year after winning the 21-and-under version of the event at the Next Gen Finals but announced the end of his season after sustaining the ab injury, also forcing him out of the Davis Cup Finals in Malaga.

“After being evaluated by my medical team, @drlopezmartinez and @JuanjoMoreno_M, unfortunately this is the result of my injury: muscle tear in the internal oblique musculature of the left lateral abdominal wall with an estimated recovery time of six weeks,” he wrote on social media.

“Unfortunately I won’t be able to be in the ATP Finals or the Davis Cup Finals. It is a hard and painful moment to miss these two important events for me, but it only remains to be positive and think about recovering well. Thanks for the support!”